On June 1, RTRI set up the ICT Promotion Team. The Team has been established in order to develop a strategy and plan to promote systematic use of information and communication technologies in RTRI’s entire research and development activities and to increase their speed.

On June 9, the first joint meeting of the team and subgroups was held. At the meeting, following President Kumagai’s greetings, topics for research and development using ICT have been listed. These are enhancing safety and stability, autonomous driving and energy saving in train operation and an advanced condition monitoring by automated monitoring technologies. Techniques to share and use data were also referred to at the meeting as important basic technologies. The members discussed what role RTRI should play in order to develop these technologies.

[ President Kumagai’s greetings ]
RTRI has already been utilizing ICT in our research activities in specific technical fields and has been developing the knowhow. But now, we need to focus our accumulated knowhow on the newly-set research target which requires extensive and intensive use of ICT. Since railway systems are mainly based on conventional infrastructure, it is quite a challenge to apply innovative technologies to them, and just because of that, there is a possibility to be able to create a railway system surpassing current systems by using ICT. So, I would like to set out a reliable strategy and would like you all to actively implement research in order to build a new railway system.
Members of ICT Promotion Team
Leader: Members: Supervisors: 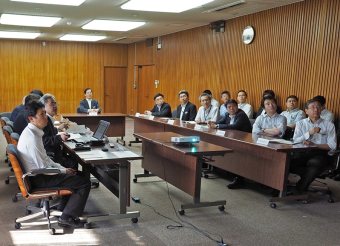 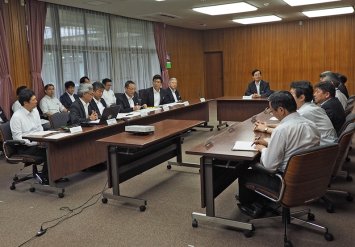