RTRI Developed an early repair method and aseismic reinforcement method for the embankment damaged by rainfalls and earthquakes. By applying these methods, the performance of embankments will be improved, while work period and repair costs will be reduced.

[Outline of the methods]

In the aseismic reinforcement method, in addition to the work of the early repair method, the embankment is reinforced with soil reinforcing nails made of steel and soil cement. This method improves earthquake resistance as well as durability against rainfalls.

・In the early repair method, gabions are installed to the damaged section. Since the gabions are built with wire mesh sheets on site, the repair work can be done quickly and flexibly and the embankment can be repaired earlier.
・Since the gabions improve stability of embankments, it is confirmed by analysis that durability against rainfalls improves by about 70% compared to the existing repair method.
・With this method, train operation cannot be resumed at the stage of the temporary repair unlike the repair work with the existing method. However, the entire work period and cost are reduced by 30% and 60% respectively. (Table 1)
・In the aseismic reinforcement method, reinforcing nails are added to the early repair method. It is confirmed in model experiments that the embankment repaired with this method is capable of enduring 50%-stronger earthquakes compared to the one with the early repair method and the cost can be 30 % lower than the existing method. (Table 1) 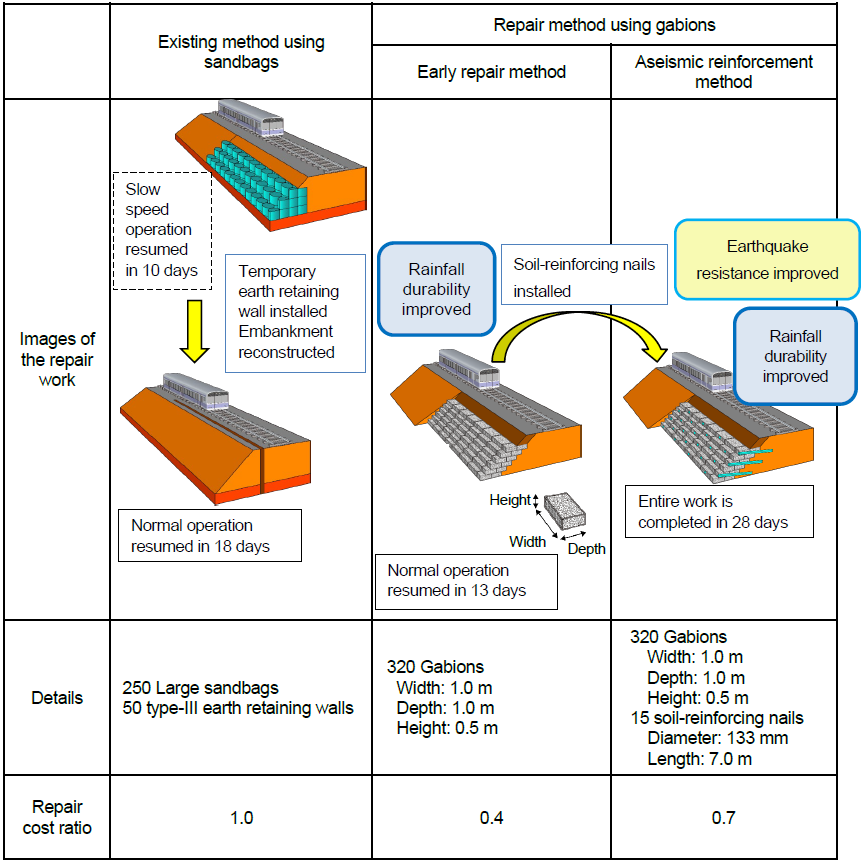 This method was used to repair the embankment of Sanriku Railways Rias Line damaged by the typhoon which hit the eastern part of Japan in 2019. (Fig. 2)
The development of these methods is the outcome of the joint research with Okasanlivic Co., Ltd, Koiwa Kanaami Co., Ltd. and Raito Kogyo Co., Ltd.

* You can see all the photos and figures in the PDF file above.