Due to the increase in the speed of trains and a deterioration of bridges, the number of bridges that are affected by significant vibrations generated when a train passes over them (referred to as "resonant bridges") is increasing and the impact on riding quality and utilities are matters of concern. As some sort of action is required if the vibration is especially intense, it is necessary to identify resonant bridges.
However, to do so, previously a huge number of bridges had to be measured from the ground to check the deflection, which was very inefficient.
Therefore, a methodto identify resonant bridges by on-board measurement data without in-situ measurements has been developed.

The issue in making such identifications by on-board measurement was to separate the vibration of the bridge from other components such as track irregularities. The focus in developing the on-board method was placed on the fact that there is a vibrational component unique for resonant bridges, which becomes prominent only when the tail vehicle has passed over the bridge.
In addition to filtering and enveloping processes to emphasize this vibrational component, a process to differentiate the lead and the tail vehicles was performed to extract only the vibrational component of the bridge, which made it possible to identify resonant bridges (Fig. 1).
Not only data on the car-body vertical acceleration for management of riding comfort, but also the track irregularity data measured by inertial mid-chord offset track measurement devices can be used for this method. It was verified that resonant bridges could be identified on the track maintenance database system (LABOCS) using the proposed method by comparing the results of application on actual high-speed railway routes and in-situ measurements of deflection (Fig. 2).

This method is applicable for determining the existence of resonant bridges to permit speed improvements of Shinkansen, as well as for screening overhead contact line facilities that are easily damaged by large vibrations generated on resonant bridges. 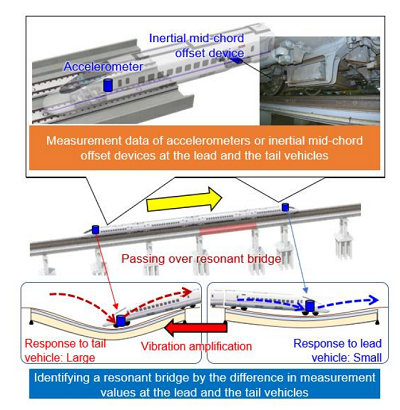 Fig. 1 Method to detect resonant bridges using the difference in measurement values at the lead and the tail vehicles 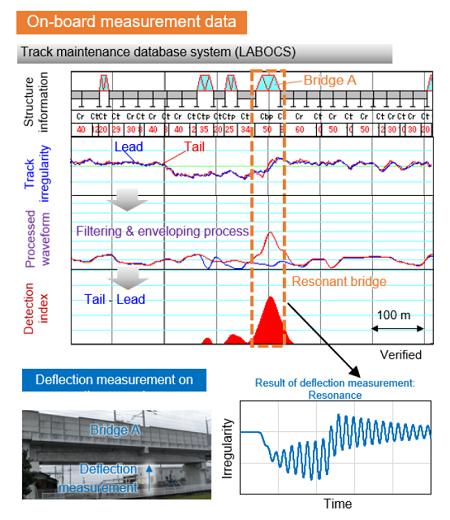