5. Detection by displacement sensor of damage to bridge bearing parts after earthquake

When an earthquake occurs and the seismic intensity exceeds the regulation value specified by the railway operator, a visual inspection is required to check that there are no abnormalities in structures.
However, a lot of labor and time is needed to inspect the bearings in high and narrow places at bridges, and furthermore, no clear criterion for the damage to bearings had been established for the resumption of operation. Therefore, an analysis was conducted to clarify the allowable slip-out amount of rubbers from rubber bearings after an earthquake relative to train speed, and a displacement sensor that made it possible to remotely detect the slip-out amount was developed.

In the development process, first the actual damage reported after an earthquake was investigated, targeting the rubber bearings installed on railway bridges and viaducts.
It became clear that the slip-out of rubber bearings had an impact on running safety and the restorability of bearings and should be monitored by sensors.
By using these slippedout amounts and running speed as parameters for analysis, the allowable value of slip-out to satisfy the thresholds for running safety and restorability of bearings was calculated.
Finally, a method to determine whether to resume operation according to the amount of slip-out displacement and train speed was proposed.
For example, if the slipout rate α is 30%, it is considered possible for trains to run at speeds of up to 80 km/h (Fig. 1).

In addition, displacement sensor system that makes it possible to remotely detect the slip-out amount quickly after an earthquake was also developed (Fig. 2).
The amount of damage can be ascertained easily from a remote place without physically having to observe it close up, by measuring the slip-out amount and transferring the measurement data to a network server.

This system enables detection of damage to bearings and an early determination to be made as to whether to resume operation, serving to speed up inspections after an earthquake and support early resumption of operation. 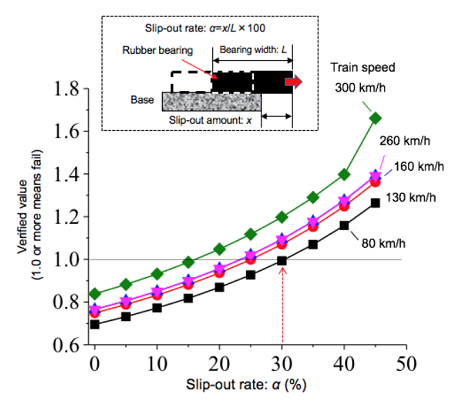 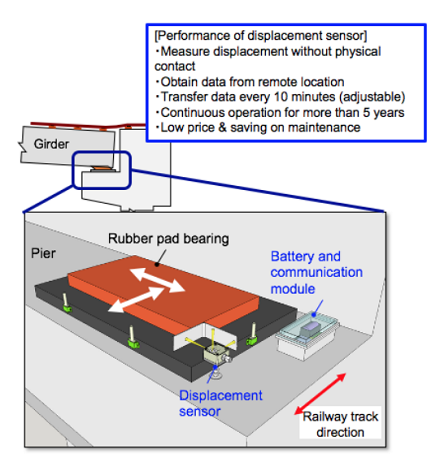