When a ground fault (a failure that causes leakage of current into the ground due to conductive flying objects or the deterioration of insulators) occurs, mostly the fault current is much smaller than the usual train load current up to several thousand amperes, so that the fault cannot be detected at a substation by the conventional standard system and leads to electric fires, damage to the trackside equipment such as supports and masts. This kind of fault is called "high-resistance ground fault." There are already some detection methods for such faults by adding trackside protective wires and/or discharging devices to the contact line system, but the high installation costs and maintenance labor are issues remaining to be resolved.
Therefore, a method has been developed to detect high-resistance ground faults solely by monitoring at substations (Fig. 1).

This method targets to detect a high-resistance ground fault with a current of 1,000 A or more and with intense atmospheric arc discharge. A high current arc may transform in time due to the air flow caused by its own intense heat and/or the electromagnetic force, and consequently, random fluctuation components in feeding currents are generated in the lower frequency range spreading widely less than 200 Hz). A waveform processing algorithm has been developed to detect the continuation of a high current arc by filtering so as to extract these components and count the number of times of fluctuation of the extracted waveform for the last few seconds (Fig. 2). By applying this method to the recorded current waveform of an actual high-resistance ground fault, it was confirmed that the proposed method could detect the fault within around 5 seconds after the start of a high current arc (Fig. 3) and did not react under normal currents (Fig. 4).
This method requires no additional trackside installation such as protective wires or discharging devices on contact lines; can reduce the cost and labor required for installations and maintenance compared to the existing methods. 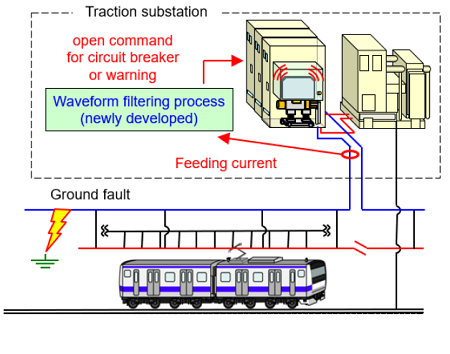 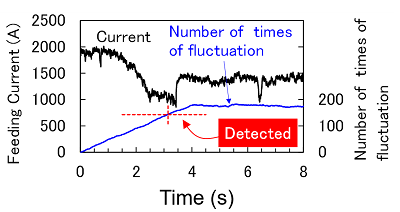 Fig.3 Feeding circuit current during a failure and number of times of fluctuation by proposed method 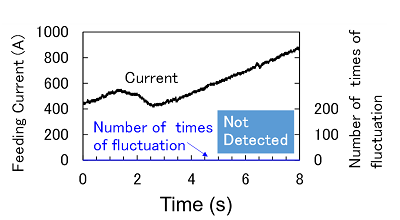