During periodic inspection of structures as currently conducted, photographs and inspector's comments are recorded mainly for extracted damages. A system utilizing 3D images has been developed to support visual inspections of structures.
By using this system, the condition of a structure and its surroundings can be checked intuitively with 3D images at any time.
The 3D images are generated from the 2D images that were taken automatically during visual inspections, using SfM (Structure from Motion) technology (Fig. 1). Typically, images taken from all directions at even intervals are used to generate 3D images.
However, in this system, the images are taken by multiple cameras whose positions are adjusted to cover a wide angle and then the needed images are selected automatically, so that 3D image generation can be achieved even when taking images with non-uniform movement during inspection.

This system can also support to detect damages and make a register. Not only does a direct comparison of 3D images taken at different inspection timings make it easy to detect damages (Fig. 2), but also a comparison of cross-sections enables any change in shape to be evaluated quantitatively. In addition, because this system can automatically extract the original images from any points designated in a 3D image and can prepare an inspection register from those images (Fig. 3), it is no longer necessary to spend time organizing and extracting images after an inspection, resulting in a reduced burden of office work. 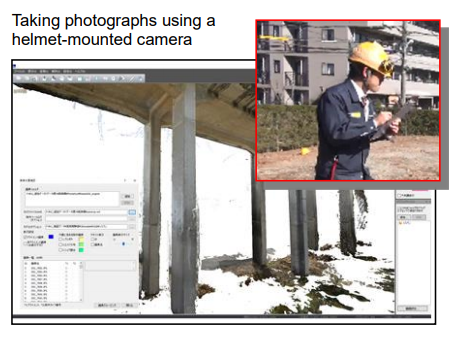 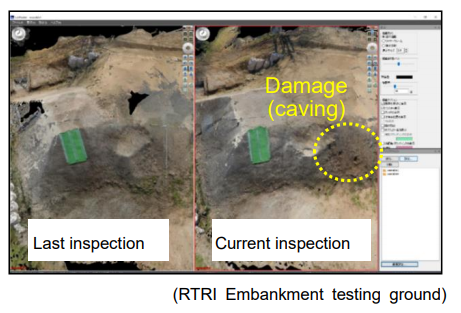