Current electric railway vehicles achieve energy saving by using highly efficient power converters; however, the electromagnetic emission radiated from the power converter can have an adverse effect on railway signal devices.
Because of this, an EMC test is performed to check the electromagnetic emission of newly produced and remodeled vehicles.
However, the need for testing and the testing timings are increasing due to the increase of diesel electric cars and the introduction of new signaling system equipment to improve safety, leading to the need for efficient implementation of EMC tests. For example, in the case of a signal device commonly used by JR companies, the number of measurement times required in one testing is 40 times and it takes more than three hours to complete the test.
Therefore, in addition to a revision of running conditions that is necessitated by the need for testing, a new measuring instrument has been developed to enable measurements to be repeated several times for each frequency to be completed at one time and a method to reduce measurement work has been proposed (Fig. 1).

First, with respect to the improvement of running conditions, electromagnetic emission is considered to be unchanged by acceleration or regenerative braking, as it has no relation to the magnitude and direction of current necessary for acceleration and deceleration. After taking actual measurements to verify this, testing with regenerative braking was decided to be optional, out of the current running conditions (five kinds). Next, because a general-purpose measuring instrument is used for the conventional measurements, only one frequency can be measured at one measurement and if the center frequency is different--even for the same signal device--the running tests need to be performed separately.
Therefore, by making a measuring circuit that concentrates only on the necessary functions for EMC tests for four units out of all the functions of general-purpose measuring instruments, a measuring instrument that can measure four frequencies at one time has been developed.

Thanks to the revised running conditions and the newly developed measuring instrument, the measuring work necessary for EMC tests to be implemented by railway operator or vehicle manufacturer can be reduced from 40 times to 20 times (Fig. 1), and thus the testing time can be halved. 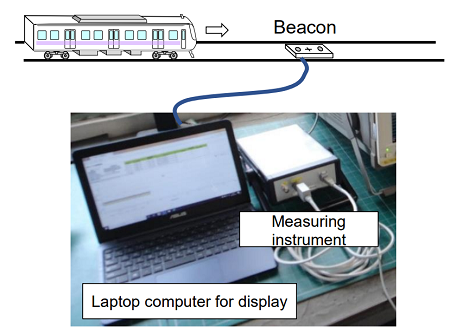 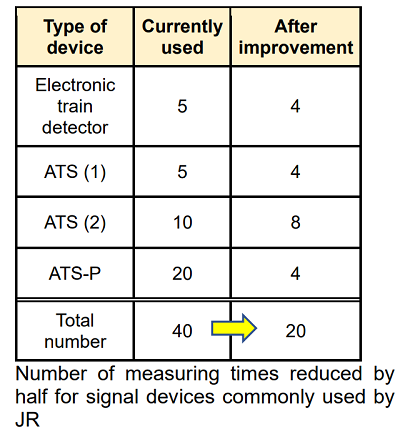