Due to recent increases in the speed of the Shinkansen, the development of an effective train nose shape has been an important issue for suppressing micro-pressure waves generated at tunnel entrances. Therefore, a different approach than before was taken to develop a train nose shape that could suppress the micro-pressure wave more effectively than the conventional nose shape based on previous theory.
In the previous theory of designing train nose shapes, taking a shape derived from model experiments and CFD analysis, smooth configurations in which the change rate of the cross-sectional area is bigger at the tip of the train nose and constant in the middle to rear part have been recommended.
However, further studies using linear acoustic theory has revealed that micro-pressure waves can be reduced by using a multistage nose shape in which the cross-sectional area changes in stages--each stage corresponding to the radius of the cross section of the tunnel. For example, in the case of a train nose with a length of about 12 m, the micro-pressure wave is more likely to be reduced by a three-stage shape (Fig. 1, Fig. 2).

Based on the theoretical knowledge explained above, the position and the size of each stage have been determined by CFD analysis in order to develop a three-stage train nose shape that can suppress micro-pressure waves without significant flow separation for axis-symmetrical tunnels without an entrance hood (Fig. 2).
As the result of model experiments to confirm the effect of a three-stage train nose, it was found that the peak value of micro-pressure waves could be reduced by an additional 5 % or so compared to the conventional train nose based on the previous theory(Fig. 3).
Furthermore, it is possible to shorten the length of a train nose by 1 m, while maintaining a performance equivalent to that of a 12 m long conventional nose shape. 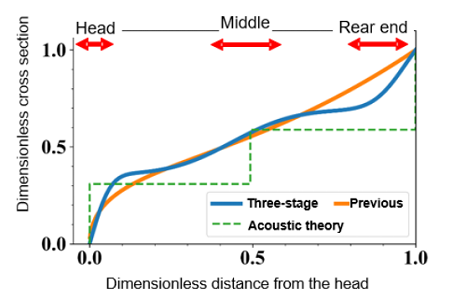 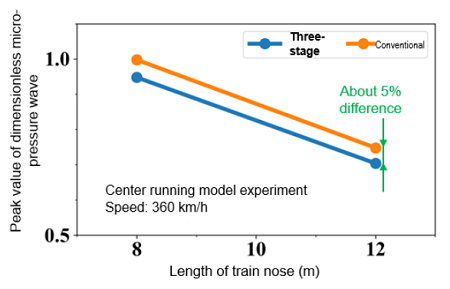