22. Rubber bush to suppress vibration transmission between bogie and carbody

Vibration of the carbody during travel needs to be reduced as it has adverse effects on riding quality. Therefore, a rubber bush for single links and yaw dampers has been developed to suppress vibration transmission from the bogies to a carbody to reduce the elastic vibration of the carbody and improve riding quality (Fig. 1).
With this rubber bush, the inner fixture (pin) and the rubber that are usually bonded and integrated are left unbonded, leaving a micro gap between them.to isolate the high-frequency vibration of the bogie.
On the other hands, the pin makes contact with the rubber when the relative displacement between the bogie and the carbody becomes bigger so that the rubber exhibits the same performance as a regular buffer rubber.
Thus, the rubber bushes achieve both the suppression of highfrequency vibration transmission and the running stability. The cost is almost the same as current parts, and it is replaceable with the existing rubber bush.

Running tests on a commercial line using this rubber bushes on the yaw dampers of a limited express car confirmed that the vertical vibration of the carbody was reduced by more than 3 dB and the ride quality level (LT) was improved, indicating the effect improved the ride quality (Fig. 2).

We have conducted high-speed rotation tests on the rolling stock test plant to confirm the running stability of a Sinkansen type test vehicle equipped with the developed rubber bushes in the single links and/or the yaw dampers.
It was then verified by the excitation tests that the vibration acceleration power of the vehicle carbody was reduced by 60% under the condition where the longitudinal exciting forces became prominent (Fig. 3). 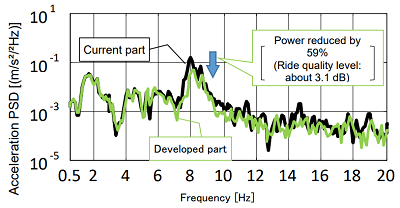 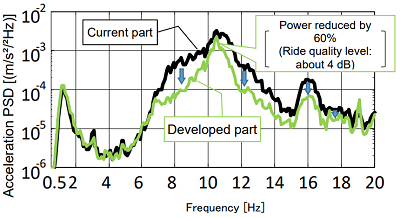