For electric railcars, propulsion systems to drive multiple traction motors collectively by one inverter (for example, 1C2M to drive two traction motors by one inverter, and 1C4M to drive four traction motors) are used widely. Since four traction motors are collectively controlled by one inverter on an 1C4M railcar, if wheel slip occurs even on just one axis, the torques of all four axes are reduced due to re-adhesion, leading to a significant degradation of acceleration performance.
Therefore, in order to utilize the adhesive force more effectively, torque control taking wheel slip into consideration is required.
Two previously developed techniques that had proven records for tractive effort improvement: "acceleration detection" for a 1C1M locomotive and "current difference detection" for a 1C2M electric railcar were combined (Fig. 1) to make them applicable for a 1C4M electric railcar

This combination of technologies enables a decrease in torque reduction, thus controlling wheel slip (Fig. 2), and resulting in improved acceleration performance. There are six possible combination methods for current comparison among the four traction motors of an 1C4M electric railcar, however, by focusing on the fact that the current of the traction motor on the axle experiencing wheel slip drops against the command value, and by replacing the drop in current for traction motors of all axles by current difference, a low-cost system capable of detecting sign of wheel slips using only one current difference detector set could be configurated.

By using this controlling method in combination with the already exisiting re-adhesion control method for 1C1M and 1C2M, an improvement in the performance of re-adhesion control is made available for more than 90% of vehicles used on conventional lines.
Furthermore, as most Shinkansen railcars use the 1C4M system, an improvement in acceleration performance in high-speed areas can be expected by applying this control method. 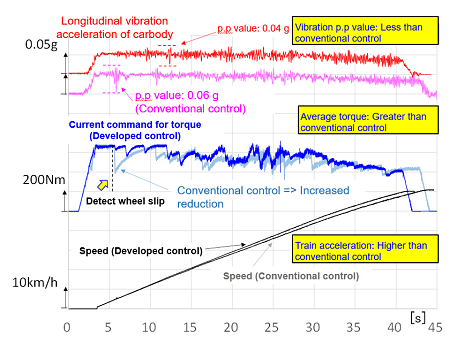 This study used parts of the achievements obtained by "Basic Research Promotion System in the Transportation Field" of the former Corporation for Advanced Transport and Technology.