Ground vibration caused by running trains generally increases linearly in proportion to the logarithm of the train speed.
To date, RTRI has proposed a method to assess the inclination of this line in advance based on the thickness of the ground surface layer and average N value of the surface layer (index of hardness) obtained through ground investigation for construction.
However, even though the thickness of the ground surface layer and the N value were almost the same level, the amount of increase could differ from other points due to local variations.

Therefore, a detailed examination was performed based on numerical simulations and past measurements, to clarify that the vibration characteristics of a structure (for example, the natural frequencies of a girder) had an impact on the local variation.
Based on this knowledge, a method has been developed to assess the increase in ground vibration when increasing train speed without performing detailed numerical analysis.
With this method, vibration characteristics including ground vibration amplification characteristics and natural frequencies of a structure (Fig. 1) are combined to make a vibration transmission model for the target point of assessment (Fig. 2), and the ability to assess the increase in ground vibration involving local variations indicated on the actual measurement data has been confirmed (Fig. 3). 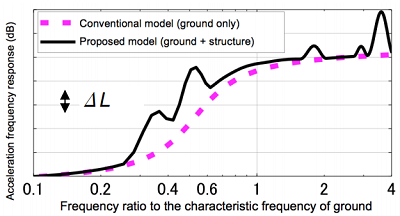 Fig. 2 Example of vibration transmission characteristics incorporating the impact by a structure 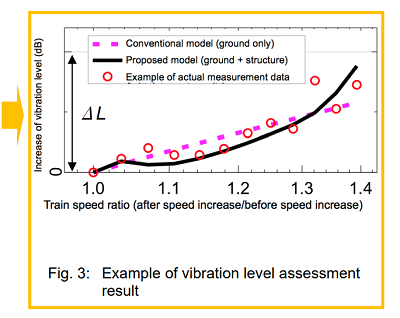