Damages caused by the contact of a wheel with a rail include those considered to be related to heat generation such as hollow wear on a wheel tread due to braking; and wheel flats generated by the slip and sliding of the wheel.
As a tool to clarify these phenomena, by extending the functions of a conventional wheel-rail rolling contact simulation method (Fig. 1), an analysis method has been developed to enable elasto-plasticity calculation by coupling(thermal and structural coupling) with thermal conductivity analysis and structural analysis.

Characteristic changes in materials caused by temperature rise such as a lowering of the yield stress of a wheel are incorporated in this analysis method, so that temperature rise and consequent thermal stress and elasto-plastic deformation at the site of wheel-rail contact, as well as the change in shape due to wear, can be calculated simultaneously and in detail (Fig. 2, Fig. 3).
Comparison with the test results obtained by a braking test device (Fig. 4) confirmed that the internal temperature immediately under the wheel tread could be reproduced within an error of 10% (Fig. 5).

A wheel-rail rolling contact simulation method can indicate contact conditions in detail, including the stress acting on the wheel and the rail, position of contact, magnitude and direction of the force, which are difficult to measure in experiments and running tests, while also moving and rolling the wheel in the simulation. By adding these thermal and structural coupling functions, the method can be utilized to clarify the phenomenon and propose measures to counter damages generated on wheels and rails, such as hollow wear and thermal cracks on wheels. 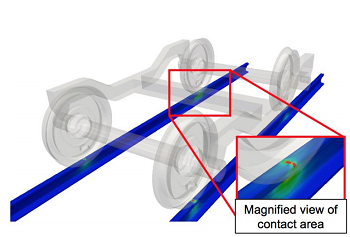 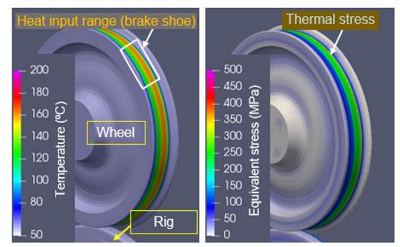 Fig. 2 Example of calculation of temperature and equivalent stress 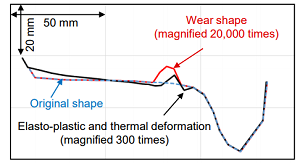 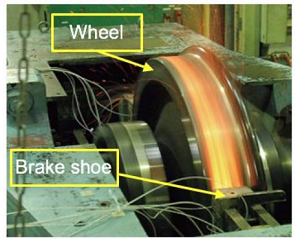 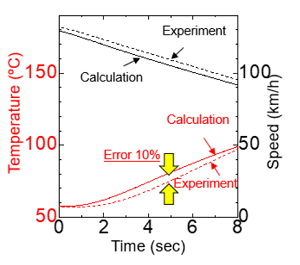