While plans are being made to increase train speed, there is a concomitant need to increase the braking force when wheel/rail frictional forces (adhesive force) decrease at these higher running speeds.
A contactless and non-adhesive linear rail brake has therefore been designed with this objective in mind. The new brake utilizes the electromagnetic interaction with the rail to produce the braking force while generating itself the power required for excitation. This means that it can operate stably even in bad weather and through power cuts. A design method was then devised and is proposed to build a compact light-weight version of this brake especially adapted for high speeds.
The iron core for passing the magnetic flux in the present design method is much smaller than in existing systems which are designed to operate even at low speed. The present design is geared to maintain braking force which influences greatly the stopping distance at high speed.
After conducting detailed magnetic field value and structural analyses and proposing a reinforced support structure, the new design can reduce the iron core by approximately 60% compared to the existing system.
A prototype suited for testing on a roller rig was then built applying the new design method described above (Fig. 1). Results after tests during a mock power cut confirmed that the same braking force could be obtained at high speed as with the existing design, despite the lower weight (Fig. 2). Using the test data, simulations were then conducted using the system together with adhesive braking to measure stopping distances when running at nearly maximum speed. The simulations demonstrated that the stopping distance could be shortened by approximately 10% compared to when adhesive braking (applied at the adhesive limit in dry conditions) is used alone. 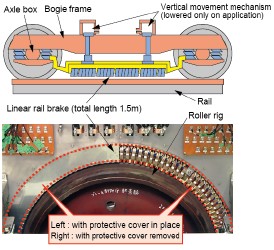 Fig.1 Picture of basic structure of the linear rail brake (top) and prototype built for tests on the roller rig (bottom) 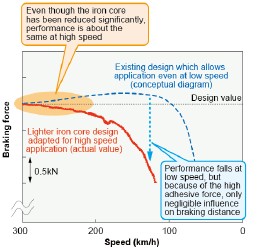