The characteristics of 90 GHz band millimeter waves include low attenuation due to dry air and the fact that they can be used in a wide frequency range. Therefore it can be applied to radar systems able to detect obstacles with high resolution from a long distance.
By applying Radio over Fiber (RoF) technology which transmits radio frequency signals through over optical fiber, it is possible to bring together control units which have the function of costly millimeter-wave signal sources and signal processing units, simplifying the configuration of the radar nodes installed on the trackside, in order to transmit and receive the radio waves. Compared to the existing systems, it is expected that the proposed new system will cut installation costs by more than half (Fig. 1). A prototype system constituted by combining a 90 GHz band millimeter-wave and RoF technology was installed and the verification test was carried out. As a result, it was confirmed that a group of several people can be distinguished from a distance of over 100m and people and concrete blocks can be detected from a distance of about 200m (Fig. 2 and Fig. 3). These research results have demonstrated that it is possible to apply available radio resources in the form of 90GHz band millimeter waves that were not used until now in the railway environment to detect obstacles on railway tracks. 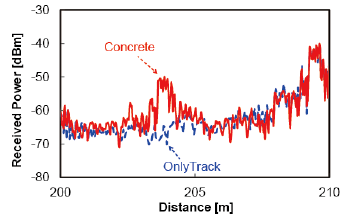 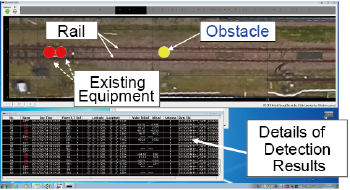