23. Method for predicting train delay and train occupancy rate with a lead time of several tens of minutes

When train delays occur, train dispatchers predict changes in train delay and occupancy rates with a lead time of several tens of minutes, in order to arrange operations appropriately by adjusting train headways etc. Because these predictions rely on train dispatcher experience, it is not easy to rationalize their decisions. Although some operation control system contain a prediction function, the functions are based on the assumption that the conditions of train delay will continue. Accuracy therefore can be a problem.

A prototype system based on this method was built for testing on an actual commuter line, to verify the accuracy of the proposed method. 70 days of train delay and occupancy rate data was used for neural network learning, while data for a period of 9 days was used in the verification test. The result of the verification tests showed that, excluding data recorded when a sudden accident had occurred, the method could predict train delays to within 30 seconds in over 80% of predictions (Fig. 1). 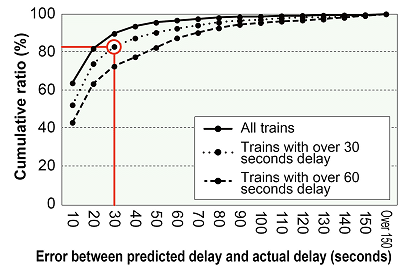 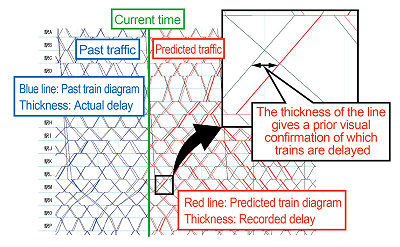