14. Hood with inside partition to reduce micro-pressure waves

Tunnel entrance hoods, which are installed at tunnel entrance portals (where trains enter the tunnel), are a common infrastructure-side measure used today to reduce micro-pressure waves emitted from tunnel portals. Tunnel entrance hoods have to be extended in line with train speed, however, beyond a certain length the hood is no longer effective, which is a problem.

Therefore, in order to meet new demands associated with increasing train speeds, a proposal has been made for a new infrastructure-side measure, i.e. to install a hood with an inside partition at the tunnel exit portal (the train exit side). Like existing tunnel entrance hoods, the new hood has a larger cross-sectional area than that of the main tunnel. It has a partition which divides the inside of the hood into two parts in the vicinity of its mouth, and one end of the partition is closed (Figure 1).

According to acoustic theory, the effectiveness of this hood with an inside partition on reducing micro-pressure waves should be approximately proportionate to the opening ratio (Opening cross-sectional area / hood cross-sectional area), (provided 0.5< opening ratio<1). Model tests validated the acoustic theory conclusion confirming the effectiveness of the hood (Figure 2).

In the case of suppressing micro-pressure waves generated by oncoming trains entering the tunnel at an end equipped with one of the new hoods, if the cross-sectional area of these new hoods and open windows distributed along its length are suitably adjusted, the new hoods will maintain the same functional performance as existing hoods of the same length. 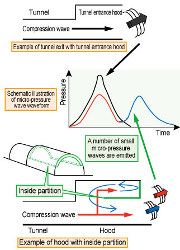 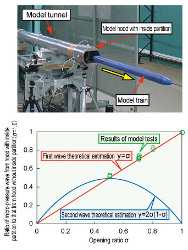