In order to reduce energy consumption in the railways, various kinds of both fixed installations and rolling stock side solutions are being investigated, and more accurate energy simulators are required to estimate the efficiency of each of these measures.

To this end, a traction power supply simulator was developed. Detailed calculations were made of the interaction between current and voltage between several trains and several traction substations, with precise speed profiles reflected by changes in acceleration due to voltage changes. In order to verify the fidelity of the simulator, comparisons were made between calculated and measured values obtained from tests using two trains running through a feeding section with two temporarily isolated substations. The results showed the correlation between the feeder current and the train speed was almost identical (Figure 1). It was confirmed that data about the trains’ energy consumption could be calculated to within 5%, and power for the substation to within 8%. 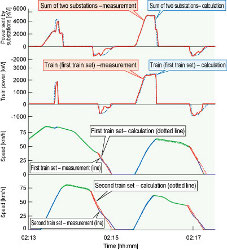 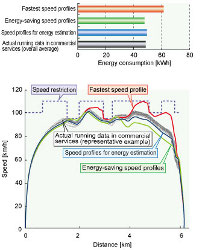