In order to gain greater insight into the causes of ballasted track deterioration, it is critical to be able to evaluate wheel / rail contact forces and dynamic internal behavior of ballast with high precision.

On the other hand, a Quadruple Discrete Element Method model (QDEM) was developed to build a ballasted track model capable of reproducing different ballast states in detail. The impact loads calculated by the wheel/rail rolling contact model were input into this QDEM program. Weekly coupling of these two models, made it possible to simulate track subsidence due to elastic vibrations and rolling / displacement of the ballasted track caused by passing trains (Figures 2 and 3).

A FrontISTR based ballasted track model was also built placing springs in the contact areas in the ballast and under sleepers. Transient response analyses were then conducted to reproduce the vibration modes in the ballast layers which influence ballast flow and subsidence (Figure 4).

In future these analytical models can be used to gain deeper insight into mechanisms leading to ballasted track deterioration, rail shelling, corrugation wear, and so on. It is also expected to be used to evaluate various corrective measures. 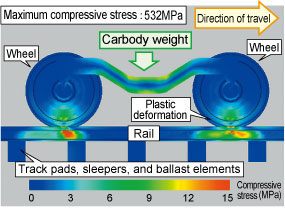 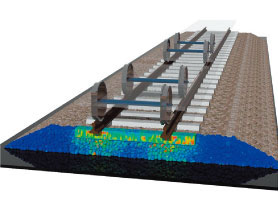 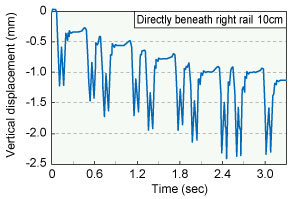 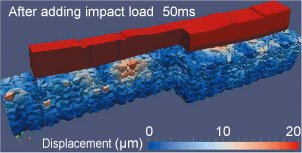