Up until now, it was thought that arc discharge, during loss of contact, was responsible for massive wear to current collecting equipment, i.e. the contact wire and contact strip on the pantograph.

Recent research however has revealed that melting bridge of the materials just before arcing seems to be the real cause for electric massive wear.

Consequently, an electrical contact model was built taking into consideration film resistance, such as oxide films on the contact surface, in order to conduct a temperature distribution analysis and gather insight into the mechanisms generating melting bridges due to heat generation during current collection (Figure 1).

Temperature distribution analysis was used to compile a “wear mode map” of current collecting materials, based on factors influencing contact wire and contact strip melt, identified as being: (1) contact voltage, (2) melting point of materials, and (3) contact resistance including film resistance, giving a quantitative visual rendition of the conditions associated with the wear mode generated during current collection (Figure 2).

Tests were used to confirm that it was possible to map consistently the electrical wear mode of other material combinations.

Wear mode map can be used in future for predicting wear according to combination of current collecting materials, and can also contribute to new material development. 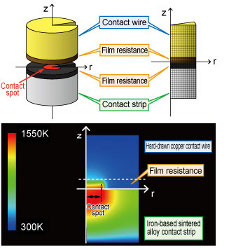 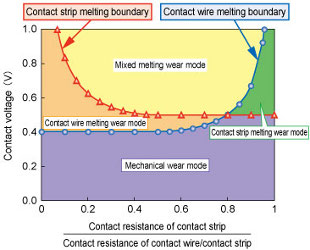