When liquefaction occurs during earthquakes, the ground suddenly loses its rigidity and hardness, leading to extensive pile foundation damage (Fig. 1).
Existing countermeasures to protect pile foundations from ground liquefaction, such as additional pile systems and soil improvement methods involve a major increase in the basic dimensions of the structure, which is difficult to apply when limited space is available.
Work was therefore undertaken to find a new method which would not require a great amount of space, and which was practical and economical to implement. As such a sheet pile reinforcement method was developed using steel sheet reinforcement which improves both the supporting force and rigidity of the structure (Fig. 2).
After clarifying the reinforcement mechanisms of steel sheet piles during shaking table tests on models using the new technique, confirmation was obtained that the developed method reduced shearing forces on the pile head by approximately 30% and axial force by approximately 20% (Fig. 3).
A manual for the technique was then compiled using insights gained from tests. Test designs produced following the manual showed that the cost of reinforcement work could be reduced by about 20% compared to existing methods. 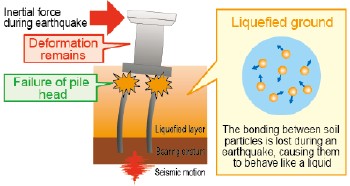 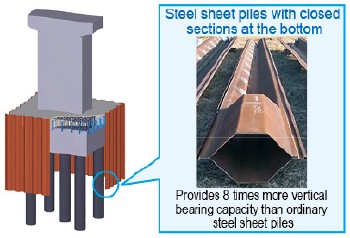