19．Possibility of practical application of a 920MHz bandwidth network

In line with the growing use of the Internet of Things (IoT), wireless network technology is increasingly being introduced for infrastruture monitoring systems using different frequency bands.
However, there is no standard network technology yet which can be broadly applied to both structures in zones where maintenance is difficult and to running trains.
As such, Wi-SUN (Wireless Smart Utility Network) technology, which was developed in Japan for the automatic collection of gas and electricity meter data, and became an international standard in wireless technology in 2012, was evaluated in tests to assess its transmission capacity in a railway environment to monitor the state of railway infrastructure.
Wi-SUN is designed to carry data in small packets, and therefore only consumes tens of mWs, which is a fraction of electricity consumption in other systems. Furthermore, the radio waves in the 920MHz band for which it is designed, can propagate over longer distances than in the 2.45 GHz band used by other communication systems, and suffer very little interference. Results of tests conducted at RTRI on a temporary test network set up using the test line, test vehicle, heavy rain rig and snow obstacle test area, to evaluate data transmission performance of the network (Fig.1) confirmed that under various meteorological and climatic conditions which can affect radio propagtion characteristics, on average over 95% of data was successfully transmitted (Fig. 2).
Results from this study demonstrate that Wi-SUN specifications can be broadly applied for the monitoring of railway infrastructure, and will the technology will therefore be instrumental in developing a railway network technology standard in the future. 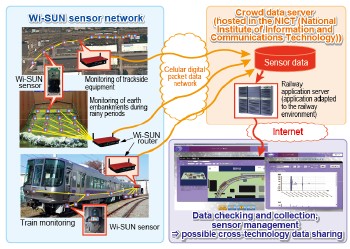 Fig. 1 Structure of crowd based wireless sensor network and Wi-SUN in verification tests 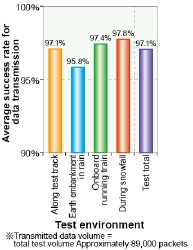