21．Quantification of impact noise due to local wear on wheel treads on Shinkansen railway noise, and method for detecting local wear.

The impact noise due to local wear on Shinkansen train wheel treads, when the trains are running at high speed, contributes significantly to railway noise (Fig. 1). The contribution of the noise has not been understood properly, nor has it been possible to detect local wear through visual inspection. Therefore, it is necessary to develop a method which can identify the state of wheel treads.
Through the investigation of a large number of wheels, the geometry of those which affect wayside noise were examined carefully, and it was found that the width of typical local wear on the tread is about 300 mm, with a maximum depth of 0.5 mm.
Then, based on the relationship between bridge noise and wheel roughness levels, based on the collected geometries, e.g. wear depth, it was confirmed that, when the roughness level is greater than that corresponding to a wear depth of about 0.1 mm, bridge noise increases siginificantly (Fig. 2).
Examination of the correlation between the maximum depth, δ, of local wear on the wheel tread and vibrations induced on concrete viaducts suggests that the vibration was approximately proportional to δ^1.8 (Fig. 3).
It is confirmed that, based on these results measured with an accelerometer placed on the concrete viaduct, it is possible to quantitatively estimate the depth of local wheel tread wear above 0.1 mm in a single bogie.

Fig.1 Example of local wear on a wheel and influence on bridge noise 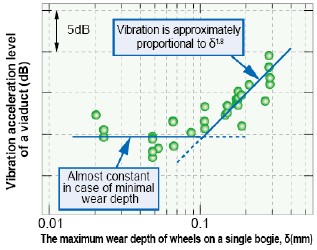