Lithium-ion batteries have been newly adopted as storage batteries for the control circuits in some Shinkansen trains. Compared to conventional lead-acid batteries, these batteries are lighter and are expected to have a longer lifetime. In order to maintain the performance of the lithium-ion battery over a long period of time and to eliminate the performance evaluation work during periodic inspections, we have developed a degradation evaluation method suitable for the operating environment in the control circuit of a railway vehicle.

First, in order to obtain the degradation trend of the lithium-ion battery, we conducted an accelerated degradation test while simulating the temperature environment and charging/discharging conditions in actual vehicles, and proposed a formula to predict the change from the initial state to significant degradation while taking the fluctuation of the battery temperature into account. We compared the predicted values of battery capacity, an important indicator of degradation, with the measured values, and confirmed that they agreed with high accuracy (Fig. 1). We have also proposed a degradation diagnosis method to easily calculate the degree of degradation of batteries after the start of operation based on charging/discharging data during vehicle operation, without performing measurements during periodic inspections. As a result of comparing the calculated values of the capacity index (differential capacity: value indicating the degree of degradation) using this method with the measured values obtained in the basic experiment, we confirmed that they had a high correlation (Fig. 2).

The developed prediction method for the degree of degradation can be used to predict the battery lifetime according to the actual operating environment in the design stage, in order to apply the same type of batteries to the control circuit. The diagnosis of the degree of degradation after the start of operation can be applied by adding filtering process against the noise and various fluctuations in the recorded vehicle data. 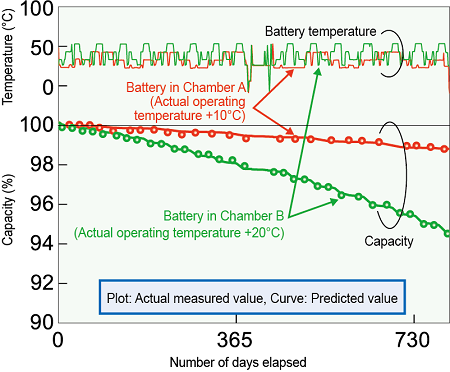 Fig. 1 Comparison of predicted values of capacity and measured values 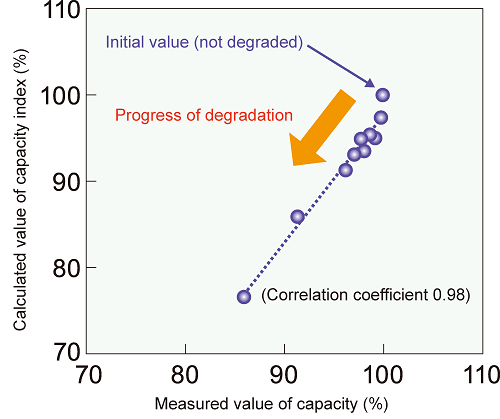