27. Reproduction of meandering airflows under the carbody through numerical simulation

It has been shown using numerical simulations of airflows around a simple shaped train model, that train oscillation in tunnels is induced by meandering airflows under the carbody floor. So far however, no quantitative comparisons have been made using detailed investigations, or actual tests that also take into account the influence of bogies.

Consequently, a numerical simulation of airflows beneath a carbody floor was carried out on a coupled train model that included bogies (Fig. 1). The output of this simulation was compared with the results of wind tunnel tests (using a 1/8.4 scale train model on a moving belt) which revealed that the power spectra of lateral airflow velocity fluctuations showed the same tendencies, which confirmed that it was possible to reproduce the meandering airflows generated in wind tunnel tests (Fig. 2).

Numerical simulation of the airflows beneath the vehicle floors in a coupled train not only contributes to the development of carbody shapes that can reduce train oscillation in tunnels, it can also be used as a tool to estimate airflows around bogies, and to develop measures to reduce air resistance of vehicles, snow accretion on bogies and aerodynamic noise from bogie parts. 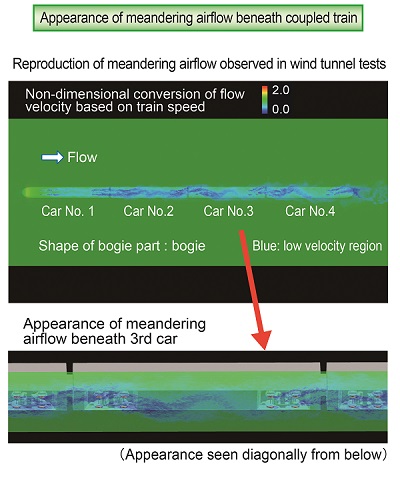 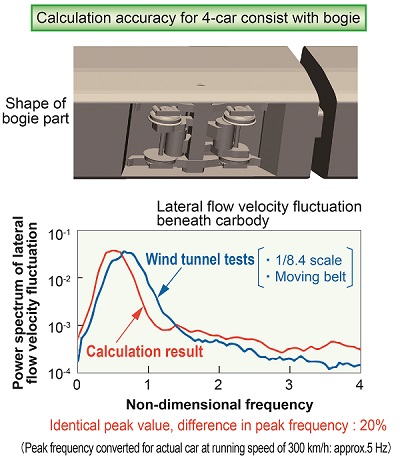