30. Assessment of driver state based on physiological indices

With a view to supporting drivers to prevent human-error induced accidents, an experimental environment (physiological indices measurement system) was designed incorporating various cutting edge measurement technologies, which makes it possible to measure variations in the physiological state of drivers when carryout driving tasks.

The physiological indices measurement system combines high-resolution multipoint encephalographs with other simultaneously measured physiological factors such as pupil diameter, electrocardiography, respiratory waves and perspiration. In addition, the system also uses motion capture and eye tracking technology which can then be applied to convert attention point data based on the subject’s degree of movement in space, into digital form (Fig. 1).

A basic tests were conducted using the measurement system on a normal adult as subject placed in a driving simulator, which suggested that it is possible to pick up changes in state of mind of the participant in abnormal situations using the multiple physiological indices.

The experiments involved confronting the subject with an accident scenario, or asking them to drive under pressure to meet tight timetabling requirements. Results confirmed that concentration and decrease in alertness during driving tasks, and the level of stress due to an accident could be objectively evaluated based on brain activity (Fig. 2).

Given the disparity in physiological indices obtained from person to person, it has been difficult up until now to use indices quantitatively. However, it has been suggested that there appears to be a way to reproduce typical variation patterns based on a combination of certain common indices found in individuals. Based on variation patterns of physiological indices found in certain individuals, this method should make it possible to objectively assess changes in state of concentration or psychological upset. 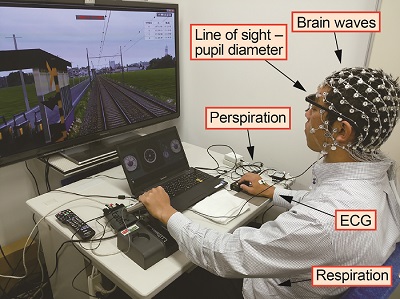 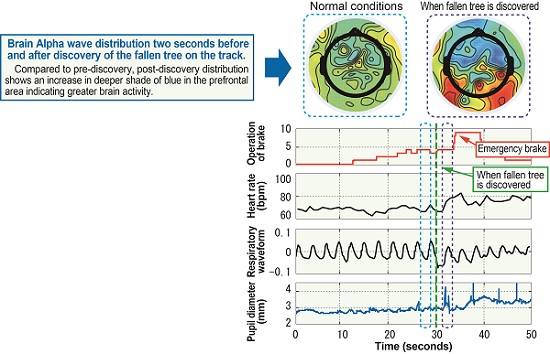