Aerodynamic force evaluations are required to assess running safety in high wind conditions, and in general they are made using wind tunnel tests. In these tests a static model of a railway vehicle is placed on a piece of railway infrastructure, and the influence of the shape of the vehicle and the infrastructure, as well as aerodynamic characteristics for the wind direction etc. are investigated.

This method however does not take into account another very important factor in aerodynamic force evaluation of a running vehicle, which is the influence of wind force resulting from natural wind and moving velocity. Therefore, with the purpose of validating the suitability of using a static train model in wind tunnel tests, a moving model rig for reproducing the wind flows around a railway vehicle was installed in a wind tunnel, and a wind tunnel test method was developed which can evaluate the aerodynamic forces acting on a running vehicle under natural wind conditions using a vehicle-mounted system (Fig. 1).

The wind tunnel test was conducted whilst varying the following conditions: running speed (of the train model), wind speed in the wind tunnel and angle between the travel direction and that of the natural wind. Wind-pressure taps suitably distributed across the surface of the carbody were used to measure pressure distribution. The side force, which has the largest influence on overturning in all aerodynamic forces acting on a vehicle (the side force contributes up to 70% of the overturning moment in critical conditions), was evaluated.

The scale of the model was 1/60th, and its carbody shape was the same as that of an ordinary commuter train. The test was carried out both for flat ground and embankment conditions (Fig. 2).

The side force coefficients were estimated from the pressure coefficients measured on the model of the commuter train. The maximum difference in side force coefficient between the moving model tests and the static model tests was a relatively small 0.04 (9%) on the flat ground and the embankments (Fig. 3). This demonstrated that it is possible to evaluate the performance of a railway vehicle in resistance to overturning in windy conditions by using a static train model in wind tunnel tests. 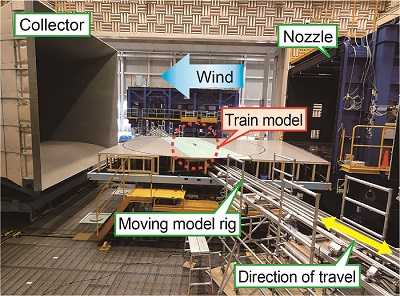 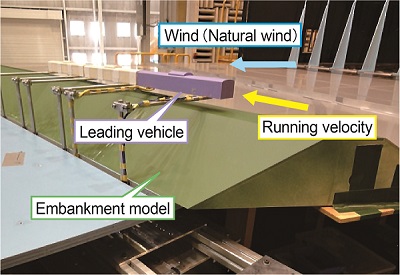 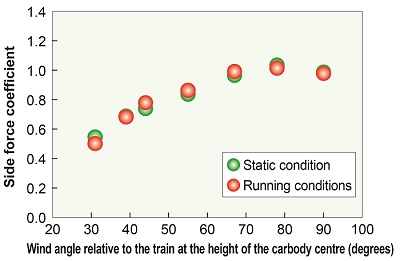