Some embankments, which under normal rainy conditions present no weaknesses have been found to collapse when subjected to sudden short bursts of torrential rain. Consequently, precipitation tests were conducted on a full-scale model to clarify the mechanisms behind embankment failures caused by cloudbursts and to investigate the effectiveness of measures applied to embankment slopes.

Test results revealed that during short downpours the cause was not so much related to water infiltration into the heart of the embankment, but rather due to the high volume of precipitation that collects in the bottom of the track bed. This water then flows over onto the shoulder of the embankment causing erosion. The remaining water that does not overflow seeps down into the base of the embankment which also causes erosion and eventually leads to collapse over time.

In the next step of the study, the model embankment featured in Figs. 1 and 2 was employed to test the effectiveness of pre-cast concrete frames as a countermeasure to cloudbursts. Trials demonstrated that the remedial work reduced the volume of water found inside the embankment, and slowed the erosion process down (Fig.3). In addition, it was found that the original embankment failed up to the shoulder when a cumulative precipitation of 480 mm was reached, whereas the reinforced embankment resisted, with only localised areas failing, with 1.3 times as much cumulative precipitation. This demonstrated the ability of the reinforcement measure to restrict failure to localised areas, thereby preventing collapse of the whole embankment. 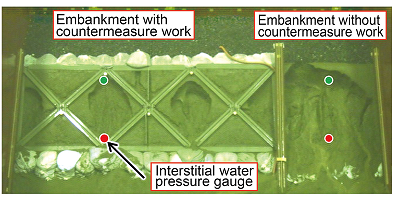 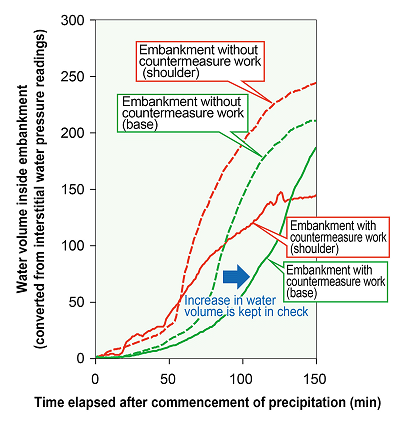 Fig. 3 Water level progression over time inside the embankment