Abutments are structures standing between bridge or viaduct sections and embankments. Past earthquake damage includes inclination of abutments and disrupted train operations due to backfill settlement. Seismic reinforcement methods for abutments proposed previously require construction space in front of the abutments; therefore, it was difficult to execute especially on the abutments of railway bridges crossing over roads in urban areas, because of limited space availability and restricted working conditions.

Based on this background, a new seismic reinforcement method for abutment using large diameter soil nailing was developed (Fig.1). This method allows work to be carried out from the side of a backfill, thereby avoiding any hindrance in front of the abutment. Model tests and numerical analyses were conducted on this reinforcement method and another method using column soil improvement into the backfill from the track side (Fig. 2), in order to clarify the reinforcement mechanisms and effectiveness of the methods (Fig. 3). Using the insight gained from the tests, new seismic design methods were proposed.

Design calculations for actual abutments were conducted on the basis of this method, which confirmed not only that this seismic reinforcement more than doubled resistance compared to abutments without reinforcement, but also that it significantly reduced deformation of the abutment itself and settlement of the backfill. 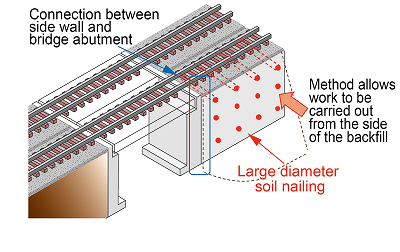 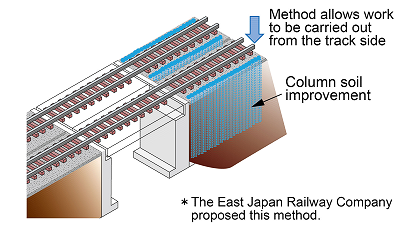