In track sections such as exit transition curves where there is significant horizontal plane displacement track torsion can lead to a decrease in the outer wheel load on the front axle of a railway vehicle. If a large lateral load is added at this stage, wheel climb occurs generating a strong possibility of derailment. Preventing wheel load reduction and mitigating lateral force are both effective means to prevent this from happening.

Consequently, an “anti-derailment” prototype bogie for used on a conventional line was made adding steering assistance to a wheel load reduction suppression bogie. An axle box suspension with a built-in steering actuator which expands with the curve in the track was added to the bogie equipped with a rotary device mounted on the bogie frame designed to follow the torsion in the track and thus control wheel load reduction. The additional steering assistance reduces lateral force (Fig.1). The combined effect of both devices improves safety against flange climb derailment.

In order to verify the basic functions of the “anti-derailment” prototype bogie, running tests were conducted on curved test sections of track outside the facility. Results from these trials confirmed that the newly development bogie's flange climb derailment quotient, which serves as a safety indicator, improved by 60% compared to existing bogies in curves up to a radius of 160m (Fig. 2). 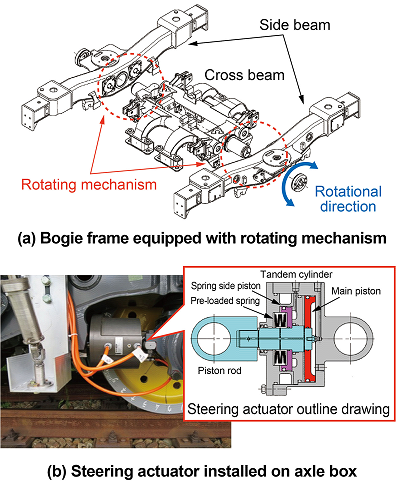 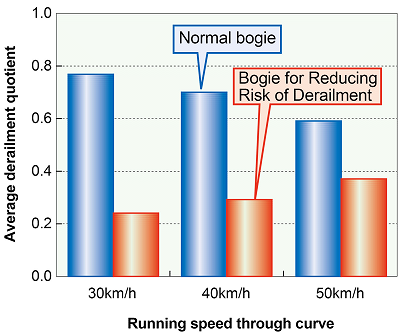