3. Fracturing grouting as a countermeasure against soil liquefaction

A fracturing grouting method was developed to reduce soil liquefaction, requiring a lower volume of injection material (Fig. 1). The hardening time and viscosity of the grout used in this method were adjusted before injection in order to allow the grout to fracture the ground.

The fracturing densifies the surrounding ground increasing resistance to liquefaction. The present method allows the grout to be injected in various directions, making it possible to bring improvement to the area of ground being targeted.

Figure 2 shows the result of a ground survey after applying an injection rate of 10% (1/3 of the existing method). The Nd value indicating hardness, the coefficient of earth pressure at rest and soil density increased after the grouting. These results were used to make estimations of the possibility of soil liquefaction and level of liquefaction damage, which in turn were used to verify the degree of liquefaction influencing a structure that could be ignored and the amount by which liquefaction could be reduced. This demonstrated that ground condition could be improved significantly even using a lower injection rate, which also cut cost and work time compared to present methods. In addition, this procedure can be used in a wide range of conditions, since it can be applied under existing structures because of the small amount of ground upheaval and irregular displacement of the ground surface, and used in confined locations because of the compact size of the grouting machine. The present working method has already been applied along in-service lines directly beneath earth embankments as a countermeasure against soil liquefaction. This experience demonstrated that the method can be applied without any trouble, and does not cause any track deformation. 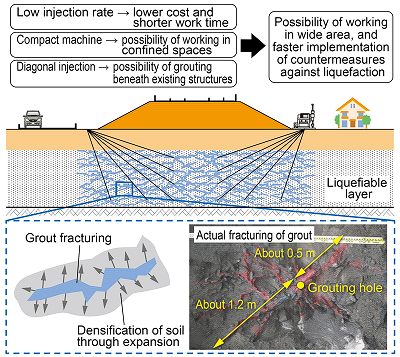 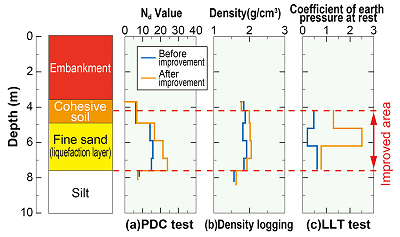