14. Profiling (through grinding) of aging rails based on X-ray diffraction analyses

In order to avoid damage from rolling contact fatigue (RCF), rails are re-profiled (at present new rails are generally ground 0.1mm before reaching 50 million gross tonnes of passing traffic). In order to find the optimal re-profiling interval and depth, it is first necessary to quantitatively determine the area affected by the RCF layer. As such, X-ray diffraction analysis was used to quantitatively assess the rail in depth from the surface (to obtain dislocation density and X-ray crystallite size which are two indices showing the degree of RCF), and two-cylinder test specimens and a rail RCF layer were evaluated.

After establishing the relationship between micro-cracks in the rail caused by RCF and the evaluation indices obtained through X-ray diffraction analysis, it was found that the threshold for micro-cracks to appear was when dislocation density reached or exceeded 1015/m2（Fig.1）.

Based on this result, analysis of an aging rail (straight section, no profiling, 450 million gross tonnes of traffic) showed that the influence of RCF reached a depth of approximately 1.1mm (Fig. 2), and it was confirmed that the rail surface had reached a condition where micro-cracks were about to appear (Fig. 3). The aging rail was then profiled to a greater depth (grinding to a depth of 0.3mm), and it took a further 50 million gross tonnes of passing traffic for the rail to reach the stage where micro-cracks were about to appear, which demonstrated that the currently used profiling interval was appropriate (Fig. 3).

Considering the depth of RCF influence on a new rail after 50 million gross tonnes of passing traffic (depth of approximately 0.35mm (Fig. 2)), a proposal was made to grind aging rails twice, based on the premise that it would be possible to minimise the residual influence of RCF on an aging rail if the first profiling to a depth of 0.3mm was followed by a re-profiling to the same depth before the next 50 million gross tonnes of passing traffic.

By shifting to the currently used re-profiling after this rail grinding, it is expected that RCF on ageing rails can be reduced to the level found in new rails from when they are laid to being re-profiled using the present method. A separate study will have to be made to analyse this principle when applied to curved sections. 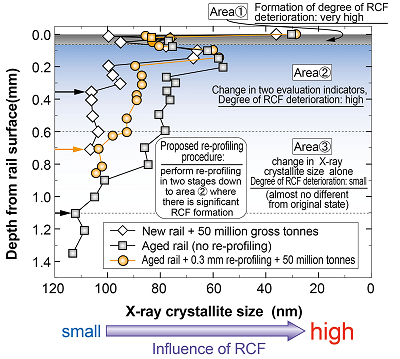 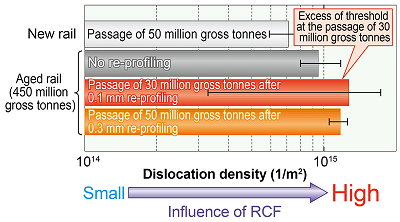