Over the past years, a growing number of electronic devices have been used in railway signalling equipment. While there are many factors that make it difficult to understand clearly how electronic devices deteriorate, the problem is particularly acute in the case of electronic interlocking equipment where renewal is not only costly but also time consuming, and therefore there is interest in finding a way to evaluate the optimal time for when this type of equipment needs to be replaced.

As such, an accelerated parts ageing model was developed for each of the electronic components in an electric interlocking equipment, taking into account the environment in which they are used. The acceleration coefficients obtained through this calculation were then used to develop a serviceable life evaluation method for the whole device.

The serviceable life evaluation method is composed of five stages (Fig.1) to predict the increase in failure rate over time (the ‘wear-out failure period’ found in reliability studies). Once the most critical component has been identified, the serviceable life of the overall device can be obtained. The most important development was a method to estimate the cumulative failure rate (Fig. 2) based on the reliability compliance test results for each part (accelerated ageing tests conducted by the component supplier), since this makes it possible to omit additional accelerated ageing tests for safety side evaluations. Trials on an electrical interlocking equipment in a small station confirmed that this method was able to identify age related changes posing a risk of failure (number of failures and increase in failure rate), and to determine which electric component would fail first (one failure in approximately 29 years for a device used in 50 stations) (Fig.3).

Following this, a calculation tool was devised to facilitate renewal planning for electrical interlocking equipment. 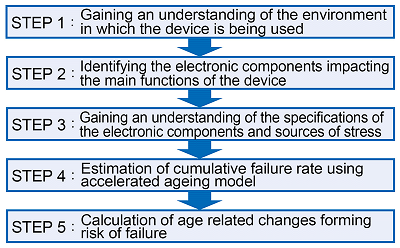 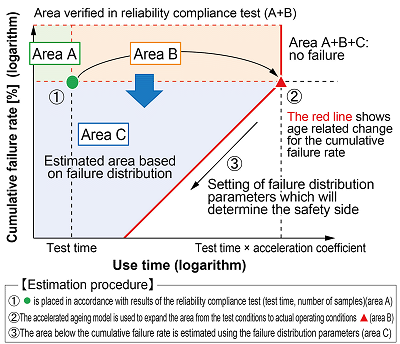 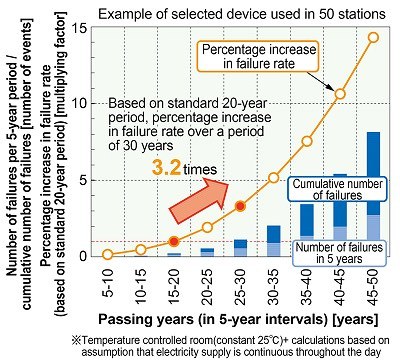