There are demands today to make railway vehicles not only lighter and more rigid, but also lower cost. Current body structures are mainly built with stainless steel frames and sheets, however, this construction method limits the chances of satisfying the demands just mentioned. As such, the present research adopted press-molding car bodies and developed a structural optimization algorithm to design the press-molded body structures to obtain a lighter more rigid body structure.

First, the stress distribution for a whole single car body was evaluated using FEM analysis, to form the optimal structure base. The result was used as a load condition, and based on the premise that they would be press molded the optimal structure for each part of the car body was found (side windows, doors, roof, etc.), deriving a design that would be lighter and more rigid than current car bodies (Fig. 1, Fig. 2). The derived structures retained a set strength with the surface irregularity obtained analytically. The press-molded parts were then joined to the outside plate to form the car body (Fig. 3). A FEM analysis confirmed that the resulting body structure that was 17% lighter while the higher rigidity of each component increased the overall body structure's bending rigidity by 12% (Fig. 4).

Existing car body construction methods are also based on assembly of different parts, however, with this new approach, everything is press-molding reducing the number of components and therefore significantly reducing the overall cost of the final structure.

This structure optimization method can be used not only as a tool to design body structures that are more energy efficient and conducive to future higher running speeds, it can also be applied to improve ride comfort because of higher rigidity. 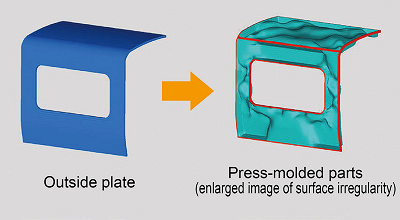 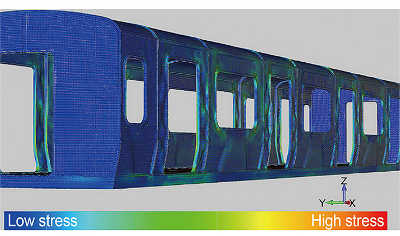