The appearance of flats on a railway wheel tread generates unusual vibrations and may cause the unwanted result of parts falling from the train.

Consequently, in order to understand the influence of wheel radius and degree of wheel damage on bogie vibrations, a wheel tread was artificially given a flat and rolling tests were carried out on a rig. After analyzing the peak values of vertical acceleration of an axlebox at different speeds, it was established that as speed increases, maximum vibration acceleration occurs at around 30km/h, and that the length of the flat had a significant influence (Fig. 1). Based on this premise, and judging by vertical acceleration and vertical displacement time-series waveforms of the axlebox, it was confirmed that the flat caused the wheel to drop causing an impact with the roller rig, which was the source of the large increase in vertical acceleration (Fig. 2).

In addition, it was found from the relationship between the speed and time from the beginning of wheel dropping to impact (Fig. 3), that as speed increased the impact point moved to the rear of the flat. Consequently, above a certain speed, the drop in the axle box decreased causing the resulting acceleration to fall also (Fig. 4).

These observations can now be used as a means to check the actual shape of wheel damage and to determine the impact of damaged wheel treads on bogies. 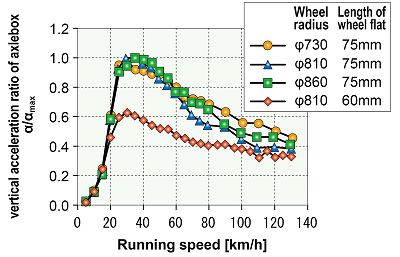 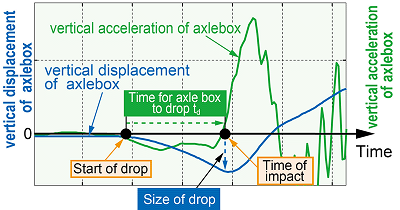 Fig. 2 Evaluation of time where axle box drops by means of vertical acceleration 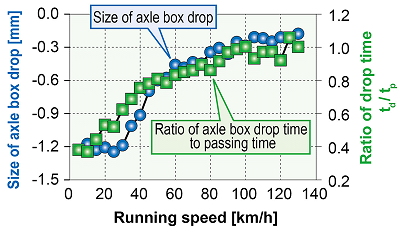