Yttrium-Barium-Copper-Oxide (YBCO) superconducting coils can be used at higher temperatures than existing superconducting materials. Therefore, if they are adapted for use as on-board magnetic levitation train (maglev) coils, operational costs and cost of refrigeration, as well as magnet weight, can be reduced. A full-scale YBCO superconducting coil prototype was therefore manufactured, and tested to evidence that it produced the necessary magnetomotive force (Indicator for strength of magnetic field: Product of electric current and number of coil turns) for operational use and had the required vibration resistance. The coil was given a specially designed aluminium-alloy housing to protect it from the electromagnetic force created during excitation (Figs. 1 and 2), and space between the housing and the coil was filled with resin in order to prevent friction induced heat generation due to vibration.

Results of the excitation test demonstrated that the coil produced a magnetomotive force of 750kA without confirming transfer or indications of transfer to normal conducting state when cooled to a temperature of 32K. The maximum excitation temperature was estimated at approximately 40K.

For the vibration tests, the full-scale YBCO superconducting coil prototype inside a vacuum vessel was excited to a magnetomotive force state of 700kA and was vibrated by a vibration device connected to it from the outside via a rod. The coil was vibrated for 20 minutes at a maximum acceleration of 15G in primary bending mode. Compared to the heat load in a non-vibrating state, the heat generation (calculated from the increase in coil temperature shown in Fig. 3) during the tests remained beneath 12%. Furthermore, there was no loss of current characteristics and rigidity in the coil before and after the vibration. The results of this research evidence that the coil has the required magnetomotive force and vibration resistance for operational use. This research also demonstrated that the YBCO superconducting coil manufacturing process and housing structure are suitable for use on-board a maglev train. 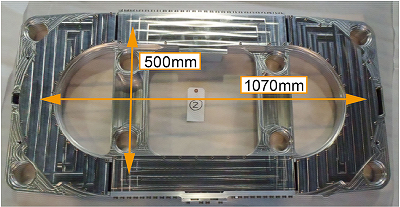 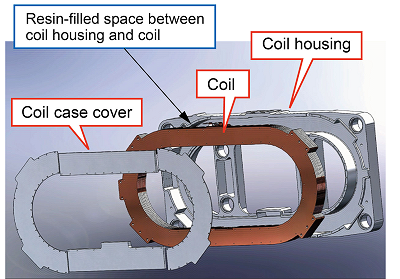 Fig. 2 Internal structure of the coil

Fig. 3 Rise in coil temperature when being vibrated