In evaluating evacuation guidelines in the case of a train fire in a tunnel, it is important to be able to predict the flow behaviour of hot gas (smoke), which is the main factor hindering evacuation, propagation speed, temperature, and places where smoke will descend. In subway tunnels (underground tunnels) and in the Seikan tunnel (Aomori-Hakodate under-sea tunnel) etc., mechanical ventilation systems determine the direction of the flow of hot gas. However, in ordinary hillside or mountain tunnels where there is no ventilation, the direction of this flow will be influenced by the various factors related to the fire (location of fire source, tunnel incline and natural wind, etc.). Consequently, a simulation method was developed to predict hot gas in case of fire in this type of tunnel.

The method uses a commercial computational fluid dynamics (CFD) tool which has in addition a special feature allowing it to take into account change in temperature and source of fire. Hot gas flows in tunnel fires are turbulence flows with sudden changes in temperature, making accurate calculation difficult. As such, a new model test rig was developed (Fig. 1) and experimental results were compared with calculated results to improve the calculation model for heat transfer to the walls and fire source. Results showed that even though the calculated temperature rise tended to be lower than the experimentally obtained value (maximum error of 20% in the maximum error including temperature measured at other points), the thickness of the hot gas layer more or less corresponded with an error margin of within 10% (blue arrow in Fig. 2), confirming that it was possible to roughly predict the properties of the hot gas flow (Fig. 3). 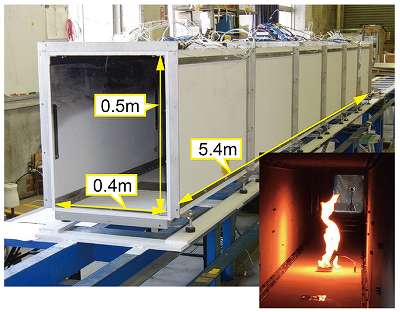 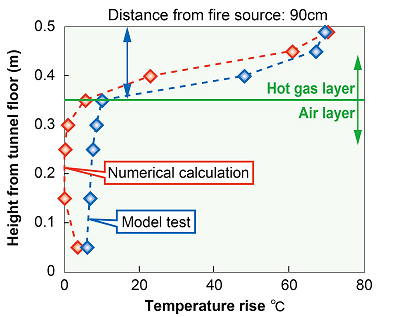 Fig. 2 Vertical temperature distribution at the central section of the tunnel