Decision-making errors (judgement errors) in the railway work environment can sometimes be the cause of an accident.

In order to prevent these errors, it is necessary to give training after having assessed and understood the judgement making tendency of individuals. This said, it is difficult to estimate people's decision-making tendencies in the workplace, therefore a set of PC-based decision-making tasks to evaluate these tendencies was developed. In addition, functional Magnetic Resonance Imaging (hereinafter fMRI) was used to confirm activity in the decision-making related area of brain whilst subjects completed the developed tasks.

Following an analysis of the 278 judgement error cases obtained from railway accident analysis data, work situations which led to errors in decision making and judgement tendencies for each scenario were considered. Results showed that over 60% of the work situations involved decisions requiring final confirmation, whereas over 70% revealed short-sightedness in judgement. Two sets of tasks were therefore developed focusing on the characteristics found to lead to errors in judgement, with one set reproducing work scenarios where subjects had to decide whether or not to confirm a completed task (Fig. 1) and a second set where one group of subjects had to make a decision – based on merit – and were immediately aware of the consequences of their decision, while in others the subjects only gradually realized the impact of their decision. In addition to these two sets, another series of tasks was developed for critical situations, which did not however frequently lead to accidents, reproducing disrupted situations where decisions are difficult to make.

Figure 1 shows the reproduction of a situation with a task requiring confirmation, where the subject is supposed to check the presence of repeated specific letters on a screen, and is asked whether they want to reconfirm their checked results. Measurement of brain activity while subjects completed the tasks showed that the decision-making region of the brain (insula) was activated (Fig. 2).

The results corresponded to the content of the tasks, and that the tasks were suitable for reproducing decision-making conditions. 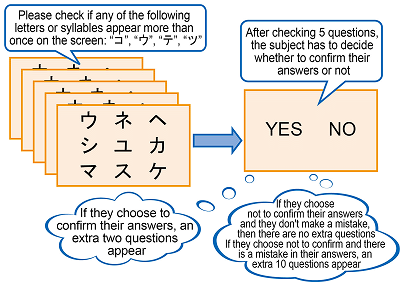 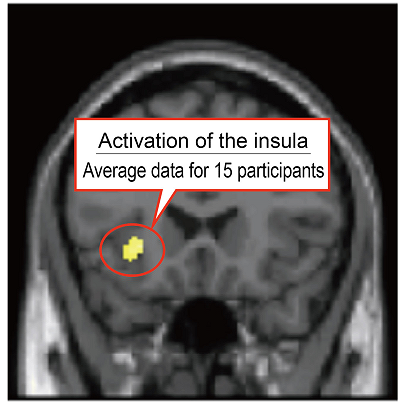 Fig. 2 fMRI image of subject whilst carrying out the task illustrated in the figure on the left