In order to increase the resilience of railways to natural disasters, a seismograph which uses a single-station was developed for issuing earthquake early warnings with more accurate seismic parameter estimation and timing, and improved noise discrimination functions.
Algorithms for earthquake detection and estimating epicentral distance, back-azimuth and magnitude were revised to improve the estimation accuracy and timing. Results from simulations using post-earthquake data confirmed better estimation accuracy. Using the improved algorithms, the time from earthquake to warning can be reduced from two seconds to one second. In order to distinguish between seismic motion and train-induced vibration, a method was developed taking into account frequency characteristics in addition to amplitude characteristics. Results from simulations applying this new method confirmed that noise discrimination performance was improved by 7.4%. On-site tests focusing on the performance of the newly developed seismograph to distinguish between seismic motion and train-induced vibrations demonstrated that train vibration was correctly recognised as being noise in over 99.9% of cases (Fig.2). Practical tests with the seismograph also confirmed their stable operation over long periods of time.
Given that these seismographs offer the opportunity to increase the accuracy and reliability of earthquake early warnings, it is planned to introduce these devices into service. The objective now is to work with seismograph manufacturers to produce the device commercially by the end of 2016. 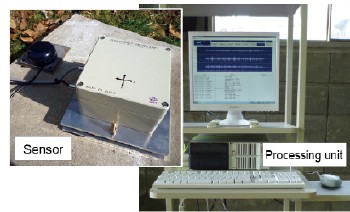 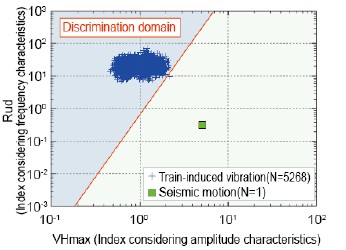