7. Revision of evaluation criteria to check deterioration in lubricating grease used on trains

Lubricating grease is critical for bearings to function normally on conventional and high speed trains (Fig. 1). It is therefore necessary to be able to diagnose accurately any signs that indicate deterioration in the grease in order to be able to replace it in time. As such, the predecessor institute to RTRI established a set of standard reference values for replacing the grease, relating to grease deterioration.
Recent years have seen an increase in the use of high thermal-resistance lithium complex soap grease with the introduction of induction motors on trains, which have faster bearing rotational speeds and higher temperatures. As a result, cases have been discovered where the level of deterioration in the grease does not correspond to the reference value, i.e. changes in the dropping point, for determining the thermal resistance of that kind of grease. In addition, it has become clear that there is a need to understand the effect of increases in ferrous particles in the axle bearings from fretting wear, and the impact of differences in oil separation calculation methods, on the reference value. Then, based on insight gained into deterioration mechanisms during laboratory tests (Fig. 2) and results of surveys into the deterioration of grease used on actual trains, a new set of reference values were proposed for managing the grease in relation to the three exposed problems (Table 1). The new criteria make it possible to correctly evaluate the state of new types of grease being used, which the existing criteria could not achieve. They can also be used to determine when the grease should be replaced (frequency), and periodicity of inspection. 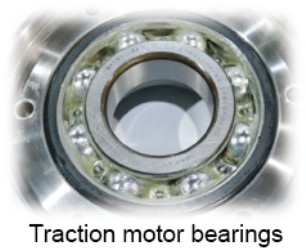 Fig. 1 Grease in use 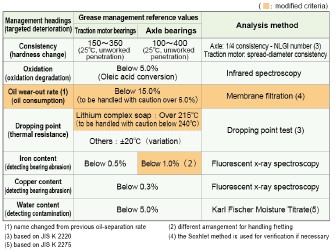