In order to counter the impact of large scale tsunamis caused by subduction-zone earthquakes, and to understand the damage caused by tsunamis to railway bridges, methods were proposed to diagnose damage and to calculate the effect of fluid forces acting on bridges.
In the course of this research, tsunami tests were conducted, providing insight into the fact that in the area close to concrete bridge girders, the water level rose as the flow speed fell, and that there was a difference in water levels between the upper and lower flow around the girders (Fig. 1); a method was then proposed to calculate fluid forces acting on girders.
The proposed methods can calculate fluid forces exerted on the bearing surfaces between concrete girders and bridge piers, using information about the bridge, and the height and speed of the assumed tsunami (Fig. 2). The lower resistance forces of the bridge pier and the bearing (girder-dropping prevention devices) are taken to be bridge resistance, which in turn is compared to the calculated fluid force, in order to evaluate tsunami damage to the concrete bridge in terms of girder outflow and damage to piers. Tsunami tests were carried out on a concrete bridge mock-up equipped with girder-dropping prevention devices and steel bearings. The proposed method calculated the fluid force using the wave height and speed under which bridge damage occurred, which corresponded more or less with bridge resistance, confirming that it was possible to estimate the damage to the bridge (girder outflow, pier collapse) using tsunami data (Fig. 3). Estimating damage prior to an event will facilitate the preparation of recovery plans, and is also useful for developing the girder-outflow prevention devices and bridge column reinforcements against tsunamis. 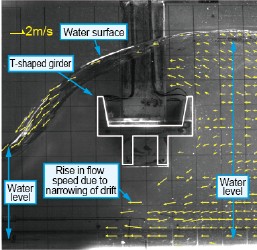 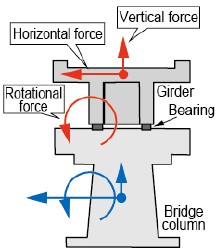 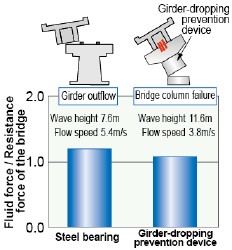