In order to prevent train doors being operated incorrectly, image analysis using an onboard camera and sensor technology have been used to develop a system to detect the presence of a platform alongside a train, and help train staff operate train doors.
Detection through image analysis offers significant advantages compared to ultrasound sensors and tags, since it does not need special sensors on the platform side, functions regardless of the shape and height of the platform and operates even in deep snow.
Given the potential influence of environmental conditions on image processing, such as changes in lighting, the stopping position sign is detected using contour data based pattern matching, and an algorithm has been developed to identify the platform side of the train (Fig.1).
In addition, a method was developed to identify the platform at which the train arrives, by combining data collected by the gyro-sensor on the yaw angle of the train as it passes through points which helps determine the path taken by the train, with GPS and station layout information (Fig.2).
Field test results showed that the presence of a platform was correctly detected in over 90% of cases (Fig.3). 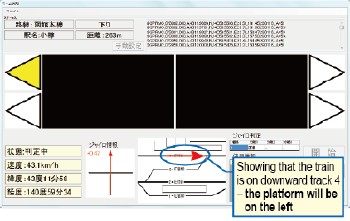 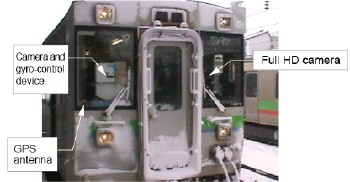