An early earthquake warning system was developed that uses ocean bottom seismometer (OBS) data from public agencies. After completion of OBS installation, data could be collected and applied to previously proposed warning methods in order to verify them in practice. After adding a processing method to prevent false alerts, an early earthquake warning system for practical use on the railways was proposed.

Data for 137 earthquakes recorded in the S-net system maintained by the National Research Institute for Earth Science and Disaster Resilience was employed first, to extract the attenuation relationship and amplification characteristics for the target regions (Fig. 1). The first observation was that the peak ground acceleration extracted from the S-net data agreed well with the attenuation relationships found in data collected on land, secondly, compared to on-land data, the tendency of the amplitude to become amplified, was confirmed.

The data showed the same tendencies as results obtained from the small ocean bottom seismometer network used for studying the method. This demonstrates the adaptability of the new method to an early warning system which can consider the attenuation relationship and ocean bottom amplification characteristics.
Following on, ordinary noise characteristics were clarified, and it was found that preventing false alerts by processing data from one seismometer was a problem. In order to reduce the risk of erroneous warnings, a multiple-site processing method was proposed, where a warning is sent out if the observed data in one site exceeds the warning threshold level (Fig. 2, Red) and the detection threshold level is exceeded in another site at the same time (Fig. 2, Blue).

The new system based on multiple sites was not slower in generating warnings, than the existing system which sends out warnings when a fixed threshold level is exceeded in only one site, whereas it can reduce the risk of erroneous warnings being sent out.

It is expected that employing data collected from ocean bottom seismometers in early earthquake warning systems in addition to on-land seismic data will make it possible to generate warnings 10 secs earlier than the previous system which used solely on-land data. 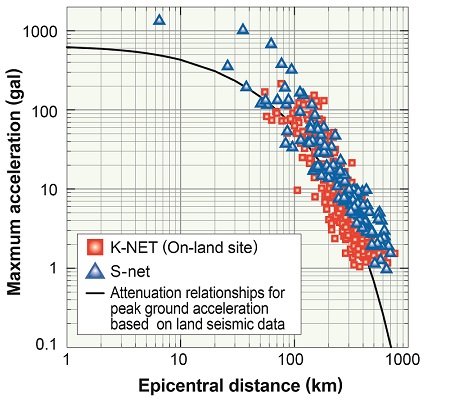 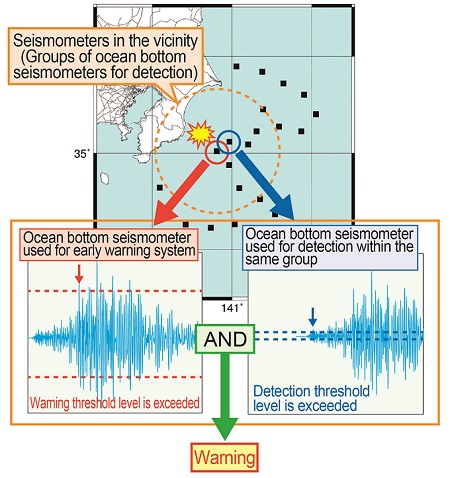