5. Anti-seismic reinforcement method for suspended-ceilings with small cavities at stations

In stations built beneath low viaducts, the cavity between the viaduct bottom and the suspended ceiling over the station is small. At the same time, a minimum amount of space must be kept free inside the suspended ceiling for passing plumbing and other pipes etc. As such, installing the usual anti-seismic braces used for reinforcement is difficult, since they would take up this space that needs to be kept free. Other reinforcement methods for replacing ceiling components such as hanging bolts etc. with channel steels exist, however, these types of constructions are complex and costly. In addition, vibration isolating rubber elements that are usually used as a noise abatement method, weaken this type of structure’s anti-seismic reinforcement performance (Fig. 1).

As such, a less costly, more practical seismic reinforcement method was developed, where the ceiling cavity is not obstructed: a hanging bolt is combined with an ordinary square pipe which is secured at the bottom by a nut (Fig. 1). Structural cyclic loading tests using more than the largest design load were carried out to evaluate the anti-seismic performance of this method, and demonstrated that it had a strong anti-seismic performance (Fig. 2).

Acoustic tests were performed to evaluate the noise attenuating packing materials and rubber edges used to close gaps in the ceiling. Results confirmed that the noise abatement performance of these materials was just as effective as the previously used vibration isolating rubber elements.

Based on these outcomes, a new anti-seismic method for suspended ceilings with small-cavities in stations, was proposed (Fig. 3). In addition, it was shown that the proposed method cuts construction cost to less than half, compared to the existing construction method employing channel steels and vibration isolating rubber elements. 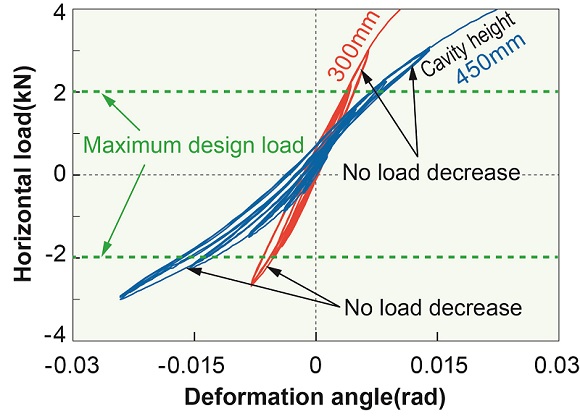 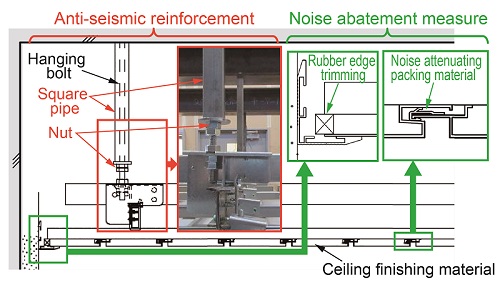