12. Development of early restoration and reinforcement technologies for embankments damaged by natural disasters

Up until now, when embankments collapsed due to earthquakes or torrential rain, temporary measures, such as application of large sandbags, were used to reconstitute the earthwork’s profile, then, whilst trains continued to run, repair work was carried out on the embankment. This approach requires the erection of temporary earth retaining walls, on-site inspections and implementation of speed restrictions.

As such, a rapid restoration and reinforcement method to improve embankment performance was developed which splits the work: a stock of gabions is kept on standby in order to quickly restore the earth bank, whilst earth bank reinforcing materials and drainage pipes can be added later while trains are running (Fig. 1). The proposed method requires 30% more time than it takes for completion of the first phase of immediate emergency repairs under the existing method, however, the total completion time of the new method is 30% shorter. In addition, the new method can lower costs by approximately 30-60%.

With a view to verifying the long-term stability of the proposed construction, cyclic loading tests of conducted over 3 years on a class-4 line (max. axle load 14t, max speed 85km/h). The residual subsidence after this period was 8 mm, validating the design as an alternative to an earth embankment as a supporting structure for ballasted track. In the functional tests conducted on the proposed structure shown in Fig. 2, the high draining capacity of the gabions meant that resilience to circular slip in torrential rain was 1.7 times higher than the existing construction method, validating the improvement in rainfall resistance.

In addition, the combined use of gabions and soil reinforcement meant that acceleration before collapse was 1.5 higher than before, which confirmed the consolidating performance of the gabions and earthquake-resistance of the proposed construction method. The insights from these results were used to compile an accompanying user manual. 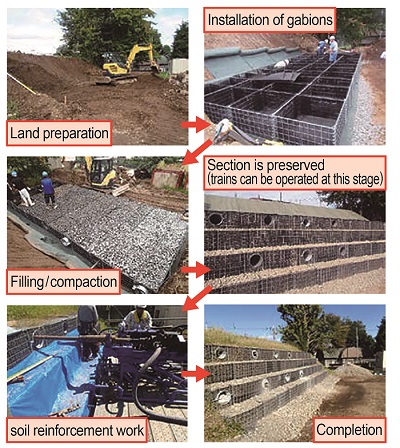 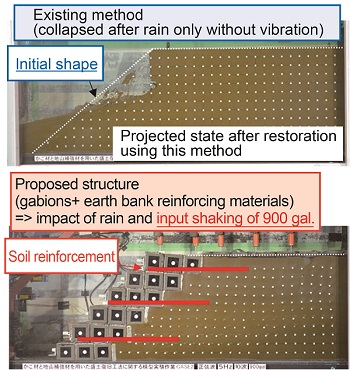