The method used for repairing rail head defects involves localized removal of the damaged part of the rail head, and filling the gap with molten steel. It is an inexpensive repair for the rail damage method and railway companies have tested the method and have now begun to use it in earnest.

In this method, heat is only applied to the affected part of the rail head, therefore, because of thermal contraction, the rail will dip after cooling (Fig. 1). Consequently, after pouring the molten steel on the rail to mend the defect, the repaired part of the rail is bent upwards whilst it is still hot (hot rail correction), in anticipation of the dipping in the rail, preventing the thermal contraction effect (Fig. 2).

Nevertheless, the following issues have arisen with this hot rail correcting process so far, which will form an obstacle to the method being adopted generally:
(1) The operator must visually measure rail deformation using a custom-designed special ruler whilst operating a hydraulic pump, which requires a high degree of skill and experience.
(2) There are cases where the rail is bent upwards too far, which increases the time required for rail grinding work, while it is necessary to keep work time to around 4 hours.

With the new machine it is possible for an ordinary operator (without the specialist skills) to accurately and quickly carry out the hot rail correction work. The machine is also simpler with only one hydraulic cylinder, in order to make it lighter and less expensive. Trials where the machine was used on actual in-service railway lines confirmed that repairs could be completed in approximately 160 minutes. Removing the risk of bending the rail upwards too far makes the new method 60 mins shorter than the existing method (Fig. 4).

In addition, in order to support the creation of a qualification system for operators using this method which is essential if it is to be used by operating companies throughout Japan, a “work manual” was compiled containing the key points on how to apply the rail head repair method. 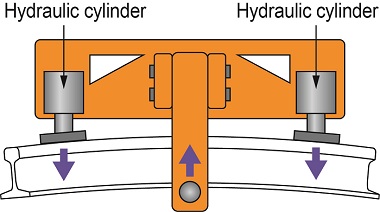 Fig. 2 Bending upwards the repaired part of the rail by hot correcting 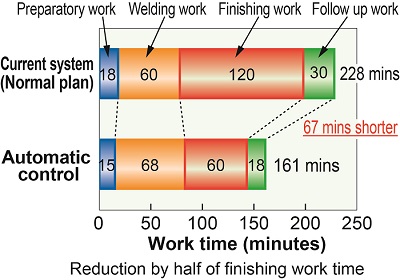