14. Simple catenary designed for running speeds of over 300km/h

Compared to heavy compound catenary systems, the problem with simple systems was that at speeds of over 300 km/h there is a risk for vertical pantograph vibrations to increase in the intervals between masts, which hinders current collection. As such, the overall tension of the catenary was increased above the normal simple catenary system level in order to increase the spring constant of the contact wire in the middle of the span between masts, thereby controlling the vertical vibration of the pantograph. Two simple catenary designs were developed, one for running speeds of 320/km/h and the other for 360km/h (Fig.1).

For the 320km/h design, in order to ensure that the wave propagation speed in the contact wire allows stable current collection at 1.4 times the standard speed, the selected contact wire had a cross sectional area of 170mm2 and was tensioned to 22.54kN.

For use at 360km/h, the cross sectional area of the selected wire was 130mm2 even though this reduces the maintenance margin against frictional wear, which was tensioned to 24.5kN. 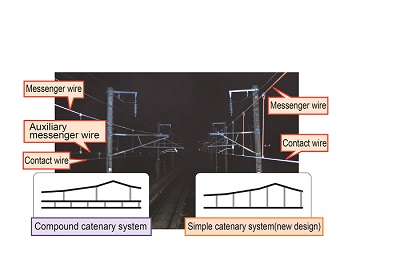 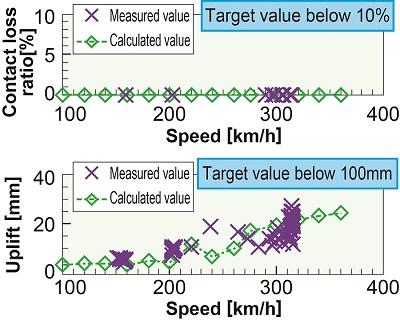