Reinforcement work on tunnels subject to earth pressure is usually carried out using rock bolts, however, in cases where the ground continues to weaken, the effectiveness of this type of measure is limited because it is not possible to maintain fixing strength. Consequently, improved performance rock bolts were developed, which can be just as effective on softened ground.

The problems encountered with existing rock bolts, included absence of filler mortar around the tip of the rock bolt, and lack of fixing strength when inserted into softened ground around the tunnel. The new rock bolts have additional packers and expansion mortar injected around the tip of the rock bolt, which maintains fixing strength of the tip. Permanent grouting is also injected into the weakened surrounding ground, which is the source of the pressure, bringing the loosening ground problem under control (Fig.1).

Based on the results of calculations performed on a single track tunnel, the effectiveness of the performance improved rock bolts in preventing deformation, is 2.6 times greater than the existing bolts, compared to the case where three times as many existing rock bolts were used (Fig. 2). Given that about three times as many existing rock bolts are required, using the newly developed bolts can reduce costs by approximately 40%. A test using the newly developed bolts was carried out on a tunnel on a disused line in Hokkaido.

Results of a trial on a tunnel subjected to pre-stress of 100 kN over one winter, confirmed that the newly developed rock bolts were able to retain axial force more effectively than the existing type (Fig. 3).
In addition, an accompanying design / work manual was drafted.

This research was financially supported by the Japanese Ministry of Land, Transport, Infrastructure and Tourism.

Fig. 2 Evaluation of effectiveness of displacement control through numerical analysis 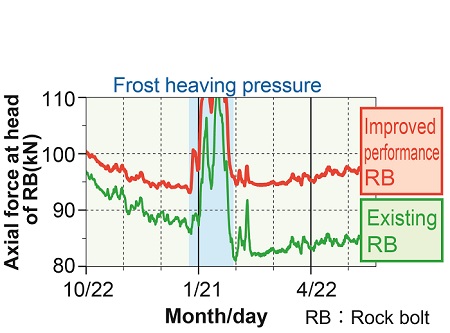