To solve this problem, we have proposed a method to estimate the earthquake motions of bedrock from motions at surface with high accuracy by devising a way to search for the solution in the convergent calculation. In the proposed method, single degree of freedom (SDOF) analytical model is used in the initial stage of the calculation. A model would be altered to the detailed analytical model with multi degree of freedom system after the result derived by the simple SDOF model is converged to some extent, by which faster calculation is achieved. As a result of estimating the earthquake motions of bedrock using the proposed method, the large amplitudes of motion, which are difficult to estimate with the conventional method, can be well reproduced. In addition, compared with the conventional method, estimation error can be reduced to 1/6, while shortening calculation time to 1/30 (Fig. 3).

By using the proposed method, we can improve the accuracy for estimated earthquake motions at the site without observation record during a large-scale earthquake, and find out the causes of damage to structures, vehicles, and electric power poles in more detail. It can also be utilized to improve the accuracy in the spatial distribution of ground motion in the Damage Information System for Earthquake on Railway (DISER), which can be used to efficiently extract the points to inspect after an earthquake and shorten the restoration time. 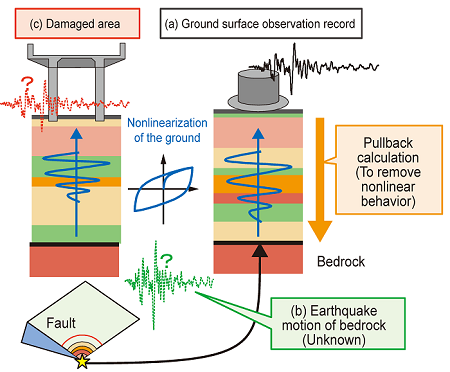 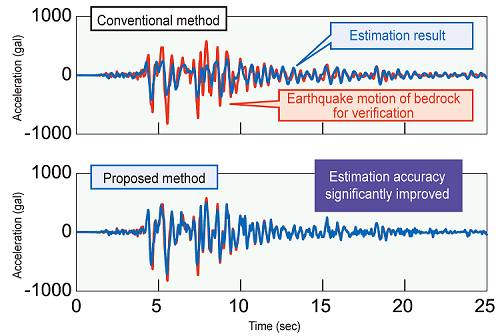 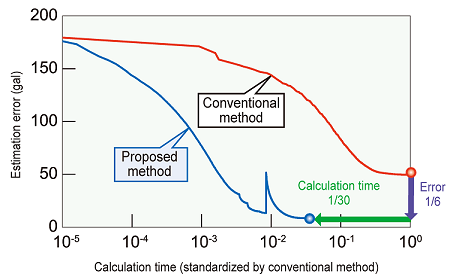