In recent years, Shinkansen lines have been extended to snow-covered areas such as Hokkaido and Hokuriku, and countermeasures against snow have become an issue in these areas. Therefore, in order to improve safety with respect to snow dropping from vehicles and to reduce the work load of removing snow accretion in snow-covered areas in winter, we have developed a method to control the flow of snow particles around the bogies and reduce the snow accretion mainly around the body panels behind a bogie.

This method consists of an intake that draws in traveling wind from the side of a bogie and a nozzle that blows the drawn-in air out onto the body panel behind the bogie (Fig. 1).

As a result of running tests using a model and snowfall wind tunnel tests conducted to reproduce the advection of snow particles onto bogies and snow accretion, we found that the mass of snow accretion on the body panel behind the bogie could be reduced by about 50% [Fig. 2 (a)]. In addition, the results of a simulation using a shape that was expected to control snow accretion in the model experiment, it was confirmed that the number of accreted snow particles around the body panel behind a bogie was reduced by about 30% [Fig. 2 (b)]. Furthermore, we investigated the effect of intake shape on aerodynamic sound using a large low-noise wind tunnel, and confirmed that the increase in noise due to the addition of countermeasures against snow accretion could be controlled to less than 1 dB.

In the future, we will apply this method to actual vehicles to verify the effect on preventing snow accretion and its impact on the increase in noise. 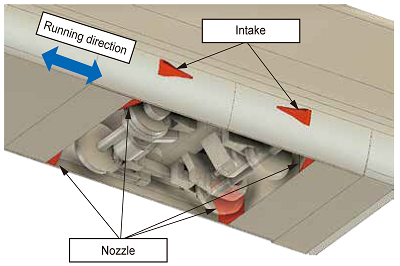 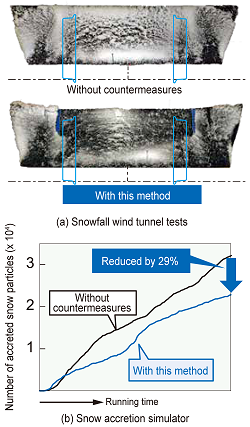