The 2011 off the Pacific Coast of Tohoku Earthquake was a massive earthquake of a magnitude of 9.0 caused by a subduction area measuring 500 km long and 200 km wide. Seismic ground motion was observed across the whole of Japan, and caused liquefaction damage as far away as in the Kanto Region. In order to simulate the ground motion of the next forecast M9 earthquake, it is necessary to simulate dynamic rupture on a large fault plate and the propagation of ground motion across a vast area.

This simulator was therefore designed to represent dynamic fault rupture processes and 3-dimensional variations in deep subsurface structures. Information about fault models and deep subsurface structures has already been stored a database, allowing simulation of seismic ground motion to be conducted easily with limited input data, such as the area used for calculation and source location, etc. When the simulator was used to simulate the ground motion which occurred during the 2011 off the Pacific Coast of Tohoku Earthquake, it was able to reproduce the long duration ground motion in the Kanto Region located far away from hypocentre, even 250 seconds after the earthquake occurred (Figure 1). As shown in Figure2, the difference between observed and simulated values in terms of the JMA seismic intensity scale was accurate to within ± 1, validating the applicability of the simulator for M9 earthquakes.

The Government Headquarters for Earthquake Research Promotion has released information that there is a 60-70% probability of a great earthquake occurring along the Nankai Trough over the next 30 years. Using the simulator, it will be possible to evaluate damage to railway structures and identify points which would be particularly vulnerable during a forecast great earthquake, in advance. 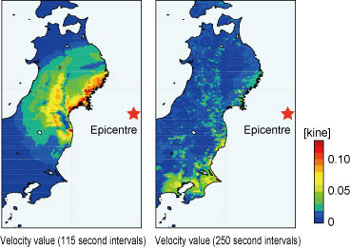 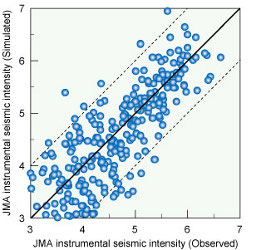